Getting to know the Air Chief... Ron Fortier! 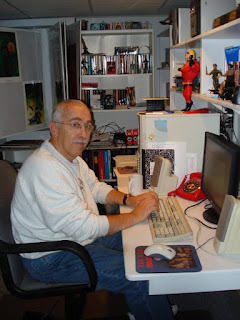 Ron Fortier may have his hands full as the Air Chief/Publisher of Airship 27 Productions, but first and foremost, the man is a writing powerhouse. His credits include everything from Rambo to Popeye to Gene Roddenberry's Lost Universe, as well as his own creations like Captain Hazzard and Mr. Jigsaw.

Fascinated by this lifetime of work and achievement, we couldn't help but seek Ron out to chat with him a bit about that history.

Surprisingly I seem to be writing lots of short stories these days, after a drought of about eight months.  I just turned in a my second Spider story to Moonstone Books and will do a third later this year.  I'm writing another short for them featuring as yet another classic pulp hero.  Writer Jim Beard is launching a new series at Pro Se for Tommy Hancock and invited me to join the team, so that's another one.  Oh, and I'm writing a new Brother Bones story which will hopefully see print in Pro Se Presents soon.  Of course I've still got that new Captain Hazzard novel on hold, that I have to get back to sometime.

Good question and not all that easy to answer.  I think I gravitate to themes that deal with heroic sacrifice.  I'm not big on the modern sensibilities of anti-heroes.  Which is why I write pulp, I prefer clear cut heroes.  At the same time, themes of loyalty seem to resurface as I enjoy writing about multiple characters rather than the lone avenger type.  In most of my stories, the protagonist surrounds himself (or herself) with a support group and I find writing about that team spirit attractive.  People bonding together against incredible odds out of honor and loyalty to save the world. The more bombastic and grandiose, the better.

Pulp-wise, I've done it in taking over and revitalizing Captain Hazzard.  I really have to knuckle down and do lots more of those.  I'm such a lazy writer.  Comics wise, I'd love to write C.C. Beck's Captain Marvel the way he was intended to be.  So much of DC's interpretation of him has been and hit and miss over the years.  Lots of people compare my work on my own comedy hero, Mr.Jigsaw as highly reminiscent of those early Captain Marvel comics.  I'm always flattered to hear that.

Re-writing old projects is not something I ever give any thought to.  I've always been about moving forward.  Sure some of my early work is rough and makes me cringe, but I'd like to think I learned from it and with each new project I get a little better.  The only real do-over I wish I had would have been in the comics part of my career.  I love the Boston Bombers graphic novel I wrote, but alas it took over twenty years to get finished and has two different art teams.  If I had a magic wand and could go back in time, I wish I could have had a real loyal art team to stay with the book from start to finish and gotten it out many, many years ago.  But again, the past is the past.  I've lots more things to do yet in the future.

Now that's easy, other writers.  Mostly my New Pulp colleagues.  I can't read anything by Tommy Hancock, Barry Reese, Van Plexico and all the others  (you know who you are) that make up our great community, that doesn't get me all fired up to get back to my own storytelling.  I love telling tales and entertaining people with them.  It may not provide fame and fortune, but it truly satisfies my soul.

Two stand out as being masters of clear, concise writing that is curt and economical; mystery writers Ed McBain (now deceased) and Max Allan Collins.  I never read a single book by these two masters that I didn't marvel at. Their use of language, pacing and plotting were learning experiences for me and to this day I do my best to emulate them in my own prose.

Honestly, I've never seen my writing as anything but spiritual, neither art or science.  I believe every single human being has a unique gift or talent if you will and once they recognize it in their lives, they are then compelled to use it....both for their own self-realization and for the betterment of others.  Mine is writing, it is my gift, to tell stories.  It is my truth.  I can no more stop doing it, then I can stop breathing.

I'm very happy with the new Spider story I just submitted to Moonstone Books.  I hope people will enjoy it.  And of course, as mentioned before, be on the look out for my new Brother Bones tales.  I've got some very neat twists on old horror plots that I think will surprise my readers.  Oh, and keep an eye for Mr. Jigsaw # 10 and Ron Fortier's Tales of the Macabre # 3 on the comic front.  There's a story in the Johnny Dollar anthology from Moonstone and eventually one in the Athena Voltaire collection from creator Steve Bryant.  Damn, I am busy, aren't I?

seanhtaylor
Sean Taylor writes short stories, novellas, novels, graphic novels and comic books (yes, Virginia, there is a difference between comic books and graphic novels, just like there's a difference between a short story and a novel). In his writing life, he has directed the “lives” of zombies, super heroes, goddesses, dominatrices, Bad Girls, pulp heroes, and yes, even frogs, for such diverse bosses as IDW Publishing, Gene Simmons, and The Oxygen Network. He also posts religious and political content from time to time. But not nearly as much as writing content. Between horror movies and cartoons, that is. Visit him online at www.thetaylorverse.com and www.badgirlsgoodguys.com (or follow his faith blog at www.filthyragsanddirtycups.blogspot.com). [He, Him]