In The Red is a sleazy, down-and-dirty romp through the world of sex, drugs, and rock and roll. And demons. It’s a gritty, fast-paced page-turner that leaves you satisfied, yet still begging for more.
-- S.H. Roddey, horror writer: Haunted, Devil’s Daughter


Author Selah Janel releases her new book, In The Red, a story of a wanna be rock star.  Stuck in a rut, Jeremiah Kensington just happens to find someone to represent him and a pair of boots to help his image.  But these are no ordinary pair of boots, no, these are legendary boots.  These boots control his movements and bring audiences to their knees. Jeremiah soon gets everything he wants, but what will happen when the boots start to take control? 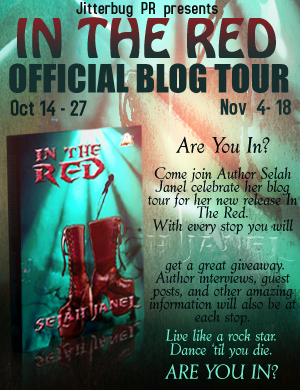 In The Red by Selah Janel (Kindle ebook; No Boundaries Press: $3.99; 321 pages; B0094K5V4C) will enthrall readers from the time they read the first words till they read the last. Now available in ebook, this tale of reaching for a dream but it’s not everything you thought it would be, can be enjoyed by individual readers and reading groups everywhere.

Book Summary: Live like a rock star. Dance ‘til you die. Are you in?

What kind of a rock star lives in a small town in the middle of nowhere and plays at weddings and funerals? That’s what Jeremiah Kensington is thinking after an unsuccessful bar gig one night. Then Jack Scratch comes into his life, ready to represent him and launch him to stardom. Jack can give him everything: a new band, a new name, a new life, a new look, and new boots…although they aren’t exactly new. They once belonged to The One, a rocker so legendary and so mysterious that it’s urban legend that he used black magic to gain success. But what does Jeremiah care about urban legend? And it’s probably just coincidence that the shoes make him dance better than anyone, even if it doesn’t always feel like he’s controlling his movements. It’s no big deal that he plunges into a world of excess and decadence as soon as he puts the shoes on his feet, right?

But what happens when they refuse to come off?

Selah Janel has been blessed with a giant imagination since she was little and convinced that fairies lived in the nearby state park or vampires hid in the abandoned barns outside of town. Her appreciation for a good story was enhanced by a love of reading, the many talented storytellers that surrounded her, and a healthy curiosity for everything. A talent for warping everything she learned didn’t hurt, either. She gravitates to writing fantasy and horror, but can be convinced to pursue any genre if the idea is good enough. Often her stories feature the unknown creeping into the “real” world and she loves to find the magical in the mundane.

She has four e-books with No Boundaries Press, including the historical vampire story ‘Mooner’ and the contemporary short ‘The Other Man’. Her work has also been included in ‘The MacGuffin’, ‘The Realm Beyond’, ‘Stories for Children Magazine’, and the upcoming Wicked East Press anthology ‘Bedtime Stories for Girls’. She likes her music to rock, her vampires lethal, her fairies to play mind games, and her princesses to hold their own.

*Please contact Alicia Justice, Jitterbug PR, cell: 513.900.7599, email: jitterbugpr@yahoo.com to book an interview with the author or to request a copy of In The Red for review.