Also, if you are interested in booking me for an event or convention, please visit my Words Done Better site for more information.
A Word About Pronouns
On this blog, I have embraced the use of they/their/them as a singular pronoun in an effort to be inclusive. I realize that may bother some folks, and it isn't quite the gold standard of Chicago or AP, but it's the law around here. Call me an early adopter, if it helps you deal with it. 😀
Posting Schedule
Here is the current schedule for blog posts:

Motivational Mondays: Links and quotations to inspire words on the page.

Feature Article Tuesdays: Each week a new roundtable, so all you writers, get ready to share your knowledge and experience.

Movie Reviews for Writers Wednesdays: On each hump day I'll post a review of a movie in which being a writer is central to the plot and even take a look at what it might have to say about the craft and the business.

Roundtable Thursdays: New interviews with other writers -- or tutorials and/or articles.

Press Release Fridays: So send me your press releases for new books.

The Saturday Links: Link outs to articles of interest to writers and readers.
Sunday Funnies (or sometimes Sleepy Sundays): I might post a funny meme about writing. Or I might just take an off day.

Note: This schedule is subject to change based on how many gremlins start attacking the airplane of my life.
About Bad Girls, Good Guys & Two-Fisted Action 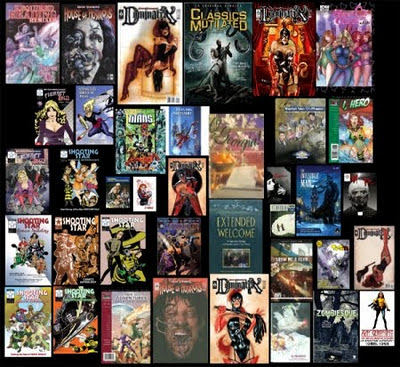 This is the official writing blog of Sean Taylor. But it's not just a place to promote his stuff. It's a resource (he hopes) of information about writing and creating genre fiction, literary prose, comic books, and just about anything else you can create with pens, pencils, paper, or word-processing software and a printer. On this site, you'll be able to find publishers calling for submissions, tutorials about the craft of writing and editing, interviews with other writers, links to helpful and fascinating articles about the art, craft and business of writing and publishing, etc. -- and of course, yes, you'll also be able to keep up with whatever Sean has his writerly little paws involved in too.

If you have a link, press release, or article you'd like to see posted here, please email Sean and let him know.

Sean Taylor writes short stories, novellas, novels, graphic novels and comic books (yes, Virginia, there is a difference between comic books and graphic novels, just like there's a difference between a short story and a novel). In his writing life, he has directed the “lives” of zombies, super heroes, goddesses, dominatrices, Bad Girls, pulp heroes, and yes, even frogs, for such diverse bosses as IDW Publishing, Gene Simmons, and The Oxygen Network.

Between horror movies and cartoons, that is.

He's the former managing editor of Campfire (formerly Elfin) graphic novels, where he oversaw the publication of graphic novels based on classic literature, world literature and historical biographies, as well as original works.

In addition to all that, he's also been a staff writer, managing editor and editorial vice president for iHero Entertainment's Writer’s Digest Grand Prize Zine Award-winning Cyber Age Adventures magazine ("The very first zine award, as a matter of fact," he adds with great pride). He served as book editor and writer for the two iHero trade paperback collections A Private Little Corner of the Universe and Playing Solitaire. And the band is currently back together again with the new I, Hero magazine and a new series of story collections and novels based on the iHero universe of characters.

He's also the former editor-in-chief of Shooting Star Comics, where he edited the critically acclaimed Children of the Grave comics series and edited and contributed to the fan favorite Shooting Star Comics Anthology, and was creator and author of the Fishnet Angel: Jane Doe comic book miniseries.

As if he weren't already overworked and exhausted, he's also written and edited for the role-playing game industry as well, having contributed to the DCU Role Playing Game published by West End Games (Gotham City Sourcebook, Titans Sourcebook, and Green Lantern Sourcebook) and having edited the Cyber Age Adventures Role Playing Game.

He's the former editor for the Baptist Men Edition of On Mission magazine and the former associate editor of On Mission magazine, and during his tenure on the magazine's staff, it won an EPA Higher Goals award (a religious publishing version of a Folio, basically). He has won several awards for his periodical work, and has contributed articles and book and music reviews to such national periodical publications as Inside the Lines, Home Life, Church Administration, CCM, CBA Marketplace (formerly Bookstore Journal), and others.

He currently lives in the Atlanta area with his extraordinarily beautiful wife (who puts up with his posing with booth babes and only rolls her eyes at him), his dog Boomer, and his cat Tohru.