There is no greater mystery for a writer to
pursue than to have his or her characters ask,
"Who am I, and who am I going to be?" 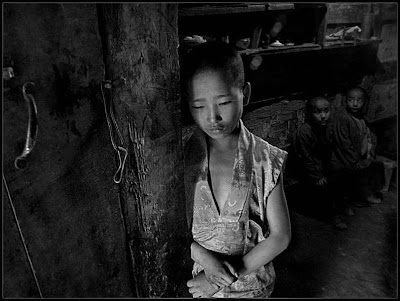 [Link] E-book sales are leveling off. Here’s why. 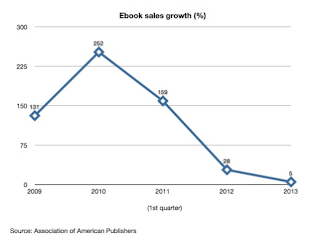 Nicholas Carr parses some new data to show a fascinating trend: Sales of e-books are no longer rising at extraordinary, double-digit rates. In the first quarter of 2013, sales were up only 5 percent from a year earlier, compared with 28 percent in the same period of 2012 and a whopping 252 percent in 2010.

It’s evidence that e-books (whether for Kindle, Nook, tablet computing devices or any other device you might wish to use to read many thousands of words) are starting to become a more mature technology. They seem to be through their explosive growth phase.

It was inevitable, of course. The question was always “at what share of the book market will e-books settle,” not “when will print books cease to exist.” Old technologies never die, they just fade into a smaller, niche offering; television supplanted radio as the dominant mass medium in the middle of the last century, for example, but radio is still a big business.

But the fact that that leveling off is already happening with e-books suggests that the ratio of printed books sold to electronic books is going to stabilize at a higher level than it had seemed likely a year or two ago in the era of extraordinary e-book growth. Carr has a number of good ideas for why; I find his first most compelling. 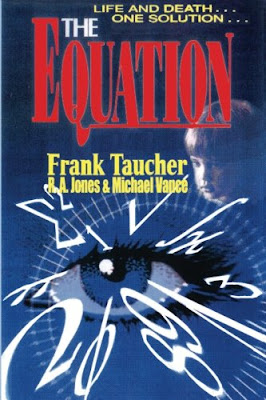 Written by Frank Taucher, Michael Vance, and R. A. Jones, the premise of this new suspense-thriller is simple but deadly: if you knew the secret of the equation and had the will, you could bring the United States to its knees!

Savy stock broker, Dianne Jassinsky, is certain that is exactly what someone is planning to do, but to save the nation she first has to convince someone, anyone that the danger is real and imminent.

Her only ally, the only one who will believe her, is discredited journalist Frank Palm, whose checkered past threatens to come back to haunt them both.

The clock is fast ticking down toward America's downfall -- and Dianne now finds herself in the murderous crosshairs of a faceless stalker!!

Taucher unleashes his expertise and imagination in this tense, gripping novel of economic and political intrigue. Majoring in Agricultural Economics and statistics, he became a very successful stock and commodity broker with several different brokerage firms. In his work, Taucher studied weather patterns, Fibonacci numbers, and different natural cycles that he was convinced guided the markets, and this research was the catalyst for writing his wildly successful, annual stock and commodity trading manual called The Supertrader's Almanac. Taucher's relentless desire for trying to figure out cycles and patterns in the commodity, bond and stock markets inspired The Equation.

Co-authors Michael Vance and R. A. Jones have written novels and short stories, for television and motion pictures, for national and international magazines, as syndicated newspaper columnists, and for comic books and strips. They are both listed in the Who's Who of American Comic Books and Comic Book Superstars. 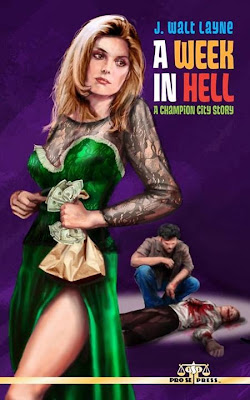 Continuing its tradition of action packed two fisted books featuring the best in New Pulp and Genre Fiction, Pro Se Productions announces the first in a Crime/Noir Series from Author J. Walt Layne! A WEEK IN HELL will hit the hard bitten streets on or before August 15th and Pro Se wants established reviewers interested in an advance digital copy to get there first!

Welcome to Champion City. A megatropolis it isn’t. But you couldn’t arrive at that conclusion by looking at the police blotter. Most everyone in the city would tell you that a day in Champion is like… A WEEK IN HELL!

Pro Se Productions introduces the first volume of the Champion City Series of Novels by author J. Walt Layne! A WEEK IN HELL

It all starts with a girl and a bag of cash. Candi was the kind of gal who could give a guy indigestion. She was poison, with looks to kill, a reluctant moll looking for a way out. Thurman was a young flatfoot, not necessarily the knight in shining armor. He went to shake out a brawl and nearly fed her his gun, was it any wonder he got a date? They spend an evening on the run, but where does it lead? Just when it looks like its over, BOOM! Is it a dead girl, a bag of somebody else’s dough, or both?

Written in the style of slang ridden, bullet riddled classic crime Pulp and mystery fiction, Layne’s A WEEK IN HELL drops the reader square into all the corruption and corrosion of human spirit that is Champion City. Dames, gats, gumshoes, and brass cupcakes die, shoot, run and glitter from every page. Edited by David White and David Brzeski, this book features a beautiful cover by Terry Pavlet with design, logo, and print formatting by Sean Ali and Ebook formatting by Russ Anderson. A WEEK IN HELL by J. Walt Layne courtesy of Pro Se Productions!

If you are an established reviewer of books either through a site or other venue or you have established yourself as a reviewer with a site of your own, contact Morgan Minor, Director of Corporate Operations at MorganMinorProSe@yahoo.com to request a digital copy for review. Also anyone interested in interviews with the author or other information concerning the book or Pro Se Productions may contact Morgan at the above address as well as going to the Pro Se website - www.prose-press.com.
Posted by seanhtaylor at 8/01/2013 10:43:00 AM No comments: