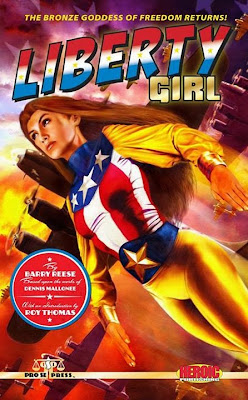 The Bronze Goddess of Freedom Flies Again thanks to two Companies known for independent creations and innovative storytelling. LIBERTY GIRL by Barry Reese, adapted from and based on works by Dennis Mallonee, is now available from Pro Se Productions via a license with Heroic Publishing.

Pro Se, a leader in New Pulp and Action/Adventure Fiction, and Heroic Publishing, a force in independent comics since the mid-1980s, proudly announce the debut of the first volume of adventures featuring one of Heroic’s best known characters- Liberty Girl.

The Liberty Girl is a World War II heroine ripped from her glory days and rocketed forward in time to today, where she’s needed more than ever! Noted Pulp and Genre Fiction Author Barry Reese adapts Comic Creator and Publisher Dennis Mallonee’s debut Liberty Girl Mini Series into a prose novella. Also included in this volume is an original Liberty Girl short story penned by Reese. The book also opens with an introduction provided by Comic Book Legend Roy Thomas, the creator behind All Star Squadron, Infinity Inc., and more.

“It’s a really big deal,” Tommy Hancock, Editor in Chief of and Partner in Pro Se Productions, says, “when two companies from different aspects of the publishing arena, especially two independents known for their own unique stories and styles, bring the best they have together to produce landmark work. LIBERTY GIRL is just that. Arguably one of Heroic’s most recognized characters has now been interpreted and realized in prose by one of Pro Se’s- and to be honest, one of Genre Fiction’s- most talented authors. Barry embraces the groundwork that Dennis built in the Liberty Girl comic series and builds a wonderful tapestry of heroism, power, and hope in what is truly one of the best works Pro Se has ever produced.”

“Sometimes,” Hancock continues, “everything just falls in place for a book. The right concept, the right writer to not only handle transition from comics to prose, but to create a brand new story for the book as well, and the right voice to weigh in on such a character with an introduction. Roy Thomas, the man who is responsible at least in part for me –and quite a few others, I know- pursuing my dreams to write, kicks off Pro Se’s LIBERTY GIRL with just the right words to set the mood for the stories to follow. And then wrap that in an absolutely stunning cover by the ever-talented Jeff Hayes, and this book- there is no other word. LIBERTY GIRL is the perfect storm of books.”

Edited by Thomas Fortenberry and Morgan Minor, LIBERTY GIRL is now available at Amazon and Barnes & Noble in print and in Ebook at Amazon for the Kindle, at Barnes & Noble for the Nook, and in most formats at www.smashwords.com.

In coming weeks, Pro Se will announce more Heroic projects, including another Liberty Girl centered book as well as an anthology featuring another one of Heroic’s best known super heroines, Flare.

For review copies or interviews with the parties involved or further information, please contact Morgan Minor, Pro Se’s Director of Corporate Operations at MorganMinorProSe@yahoo.com. To enjoy Heroic Publishing’s fantastic comics, go to www.heroicmultiverse.com. For more information on Pro Se Productions, visit www.prose-press.com and like Pro Se on Facebook at www.facebook.com/ProSeProductions.
Posted by seanhtaylor at 10/30/2013 11:00:00 AM No comments: 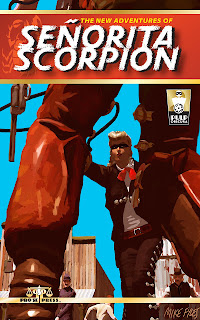 CONTENT EDITORS- Content Editors are assigned to any work Pro Se produces except for the Pro Se Presents Magazine (which has its own editing staff). Content Editors are required to understand the subject matter/genre/story being told in works assigned to them and to help authors follow parameters for stories, either established by a Bible, if the work is part of a certain imprint, or simply to make sure it meets the qualifications of Genre Fiction. Content Editors review works assigned to them for continuity issues, plot holes, implausible beginnings, events, and conclusions, as well as any other content problems. The Content Editor will be the first editor assigned and will work closely with the Author as well as the Director of Corporate Operations in completing the task assigned. Although deadlines are flexible, Pro Se encourages that 30,000 word books be content edited within 30 days of being assigned to a Content Editor and 60,000 word manuscripts be content edited within 60 days of being assigned.

COPY EDITORS- Copy Editors are assigned to any work Pro Se produces except for the Pro Se Presents Magazine (which has its own editing staff). Copy Editors are required to review manuscripts after Content Editing is completed. Copy Editors review manuscripts checking spelling, grammar, sentence construction, and other issues related to presentation and clarity. The Copy Editor will be the second editor assigned and will work closely with the Author as well as the Director of Corporate Operations in completing the task assigned. Although deadlines are flexible, Pro Se encourages that 30,000 word books be content edited within 30 days of being assigned to a Content Editor and 30,000 word manuscripts be content edited within 60 days of being assigned.

COMPENSATION- These positions are currently unpaid, although each Editor will receive free digital copies of Pro Se's entire catalog upon request. Also, Pro Se will provide positive references in the form of letters and/or other form of contact for anyone who serves in either of these positions and performs well.
If interested in either position, email Morgan Minor at MorganMinorProSe@yahoo.com to receive a short piece as a test edit. Although experience is not required, it is preferred. Please list any editing experience you have had in your inquiry. Refer any questions to the same address.
Posted by seanhtaylor at 10/28/2013 11:00:00 AM No comments: 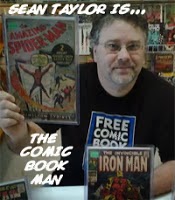 This week on BK on the Radio, we covered four of the best scary and horrific graphic novels that you need to read.

And here they are...

Based on the story of the USA's first serial killers, this historical graphic novel is as long on the story as it is on action and violence.

I almost took this off the list because I'm a good friend of Tom Waltz, but in the end I just couldn't. It's that good, a fantastically creepy ghost story about military incursions, terrorism, and parental issues. And Maloney's art sets the mood perfectly.

I Am Legend
by Richard Matheson, adapted by Steven Niles and Elman Brown
Published by IDW Publishing

At the risk of being self-indulgent, Steve Niles adaptation of I Am Legend is the stuff of legend. It's a near perfect pairing of prose and illustration. And yes, I did say "prose" not "script."

More akin to Prince Valiant than to modern comics, this version runs the text of the sci-tinged vampire tale around Brown's amazing artwork, using one to bring the other to life and back again. Even with so many words on a page, the book never becomes "heavy." Easily one of my favorite horror graphic novels ever.

However, this one is not a light, fast read, so be warned. You'll  need to carve out some quality time for this one.

Ah. I've been waiting to get to this one. This is the quintessential Neil Gaiman volume for me. Coming of age tale, a girl on the run, serial killers, misnomers, dry and dark wit, humorous violence, serious violence, all wrapped up in the mystery-enigma two-sided paper from the nice wrapping paper store, not the cheap stuff you'd find at the local dollar store.

This is Gaiman hitting on all the cylinders he really nails perfectly. It's the literary equivalent of a Gypsy Rose Lee dance number -- mesmerizing, embarrassing, titillating, vulgar, and undeniably compelling.

A Doll's House is Gaiman at his best, at his most at ease with himself as a storyteller.

To say more would be to spoil it, so I'll add just this: So many of the favorite Sandman characters to come appear in this volume, so it should not be missed -- yet it stands by itself beautifully even if you've never read any other Sandman volume. 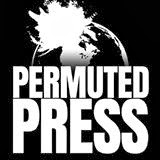 Permuted Press is currently looking for sci-fi and horror titles, whether they've been published before, currently being written or unpublished, or even in the idea stage. If you have friends whose work you really believe in that might like to have their books published by Permuted, send them my way (michael@permutedpress.com) to skip the public slush pile.

We also continue to be especially interested in PA novels, and have even recently picked up more zombie books, some vampire books, werewolves and even some very selective YA titles. There are still authors telling us that they are under the impression that we don't do sci-fi and horror, so I thought it was worth mentioning that we are interested in these genres.

Hey, kiddos, here's my schedule for the Georgia Literary Festival on November 9:

Hey, guys and gals, here's my schedule for next month's Memphis Comic and Fantasy Convention 2013:

Friday – 8pm: BAD TO THE BONE- Villainy in Pulp and Genre Fiction (DR1F8P)

Saturday – 2pm: LEGENDARY AUTHORS OF PULP:  The Writers of Classic Pulp That Everyone Knows..and a Few No One Remembers (DR1S2P)