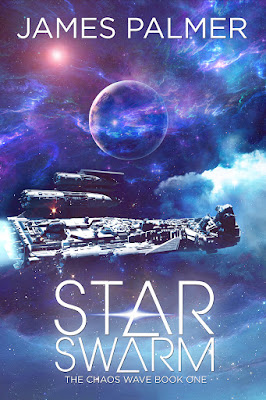 Man's outer colonies are being destroyed one by one, leaving nothing behind. Suspecting an old enemy, Captain Henry Kuttner, of the Solar Navy rail-gun ship the Onslaught, wants to investigate.

But the Onslaught is scheduled to be decommissioned, and Captain Kuttner given mandatory retirement on one of the League's pleasure worlds. But this old war dog isn't going down without a fight.

Going against orders, Kuttner leads his crew in search of answers. That search leads straight into the territory of mankind's former enemies, the deadly reptilian Draconi, whose colonies are also being destroyed, and they blame man.

Now the crew of the Onslaught must risk violating a fragile peace treaty and all out war to solve a cosmic mystery before more lives are lost. Only the ship's maverick second in command and a disgraced Draconi scientist can unravel the secret of this enigmatic enemy and its sinister purpose before it's too late. But there are certain factions who want the human-Draconi war to begin anew, and they'll stop at nothing to make it happen.

And meanwhile, in the outer dark, an ancient enemy returns. An enemy known only in the songs of a long-dead alien race. An enemy that leaves chaos in its wake.

A maverick first officer, a misfit crew and an aging vessel are all that stand between humanity and total destruction.

“Classic military science fiction in the vein of David Weber, with conspiracies and ancient threats throughout. I want the next book now." --Joseph Cadotte, author of In the Land of Nod


Go ahead and get your copy today!

And before I forget, I also want to tell you about another space opera book you can get right now! I had nothing to do with this one, I'm just doing a friend a solid by mentioning it to you guys, because I think you'll really like it. It's called Broken Worlds: Book One of the Alorian Wars, by my friend Drew Avera, and it's super cool. You can check it out by going here.