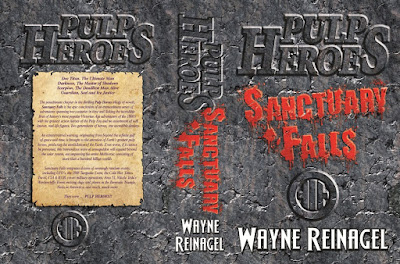 The Pulp Heroes saga is an epic adventure spanning two centuries in time and linking the incredible lives of history’s most popular Victorian Age adventurers of the 1800’s with the greatest action heroes of the 1930’s - 1940’s Pulp Era and an assortment of well-known, real-life figures. Two generations of heroes, one incredible destiny.

As the final novel in the Pulp Heroes trilogy, Pulp Heroes - Sanctuary Falls features the thrilling conclusion to the massive storyline. The main portion of the novel is situated in the year 1949. An extraterrestrial warning, originating from beyond the infinite gulf of space and time, is brought to the attention of Earth’s greatest pulp heroes, predicting the annihilation of the Earth. Even worse, if it cannot be prevented, this tremendous wave of Armageddon will expand beyond the solar system, encompassing the entire Multiverse; consisting of more than a hundred billion worlds.

While investigating the interstellar menace, the fellowship of Mystery Men (Doc Titan - The Ultimate Man, The Darkness - The Master of Shadows, Guardian - Steel and Ice Justice, and The Scorpion - The Deadliest Man Alive) band together for the final time and, along the way, unearth a succession of incredibly complex government secrets, interlaced with subterfuge, both foreign and domestic.
Pulp Heroes - Sanctuary Falls weaves an incredible tapestry, perfectly integrating dozens of outwardly random events, involving UFO’s, the 1908 Tunguska Event, the Cold War, the 1897 Aurora, Texas UFO incident, Majestic 12, Time Travel, CIA & KGB, Area 51, Nikola Tesla's Wardenclyffe Tower, the 1947 Roswell UFO incident, missing ships and planes in the Bermuda Triangle, Nazis in Antarctica, the 1908 New York to Paris Race, covert military operations, and much, much more. 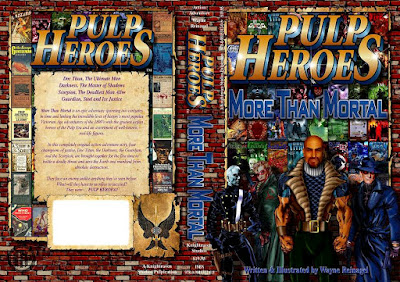 The first book, Pulp Heroes - Khan Dynasty, is situated in the year 1938. In this epic novel, the world was initially introduced to the four greatest crime fighters of the 1930’s. These incomparable champions of justice were Doc Titan, The Darkness, Guardian, and Scorpion. Aided by their loyal agents and steadfast associates, this fearless quartet of Mystery Men banded together to fight evil and dispense justice, traveling to the farthest ends of the globe and clashing against dastardly villains and ruthless madmen.
Risking life and limb, the four heroes encounter the illustrious Asian devil-doctor Hunan Sun and the roguish, Victorian man-monster Edward Hyde. Beginning in Cairo, Egypt, nearly a century in the past, a series of seemingly random events lead to danger and intrigue, as two generations of valiant figures race to stop the diabolical duo from unleashing a devastating wave of death and destruction upon the Earth.

Volume two, Pulp Heroes - More Than Mortal, takes place in the year 1945, near the end of World War II. The heroes must stop the faceless Nazi mastermind Black Skull, and the satanic, anti-hero Victor Kaine, before the scoundrels can unleash a deadly force that will swing the outcome of the war in favor of the Axis forces.

This massive trilogy is reminiscent of the great action-adventure pulp hero stories of yesteryear. Our bold heroes travel around the world and, utilizing a series of well-timed flashbacks, voyage 150 years backward through time. And as the adventure continues, the heroes soon discover that there are many dark and dangerous secrets that have been kept from them and the world at large. Secrets that could destroy them all. And, perhaps, the Earth itself.

The Pulp Heroes trilogy of novels are fast-paced chronicles about relationships between bold, humorous, entertaining characters. It is a story about daring adventure. About fathers and sons. The passing of the heroic baton. Unexpected storyline twists. Long hidden secrets exposed. It is about how everyone is linked in some way and how actions in the past affect the present. It is not merely their abilities that show who these heroes are; it is about the choices they make. Above all, it is an action-packed thrill ride. And, most importantly, it is a story about great adventure heroes and daring heroines. Together, they face enemies unlike anything they have encountered before.

What will they have to sacrifice to succeed? Who will survive?

They were … PULP HEROES!! 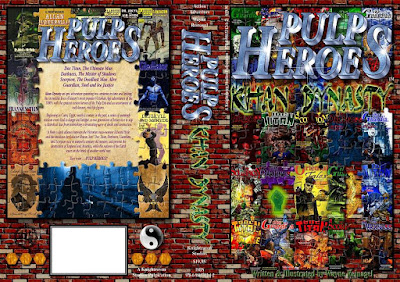 In addition to being a great epic story, the three Pulp Heroes novels also function as the backbone of the much larger Infinite Horizons universe.

Infinite Horizons is an ongoing series of action-adventure novels published by Knightraven Studios, featuring the astounding untold chronicles, extraordinary exploits, and hair-raising escapes of the greatest adventurers and explorers in the history of mankind. These incredibly diverse stories explore two hundred years of legendary heroes and villains during the Victorian age, the Pulp era, and the Golden Age of comic books, tightly interwoven with real-world events and individuals, standing alongside history’s most interesting fictional characters.

In terms of its sheer size, scope, and potential, Infinite Horizons is truly the ultimate crossover universe. It’s an endless, bottomless, literary Sargasso, linking together hundreds of novels, short stories, and characters, both real and imaginary. In 2011, the ultimate Gothic horror Steampunk novel, Modern Marvels - Viktoriana, joined the 'Steampulp' novels, Pulp Heroes - More Than Mortal, Pulp Heroes - Khan Dynasty, and Pulp Heroes - Sanctuary. Then, three smaller novels, the action-packed Hunter Island Adventure, the fantastic, center-of-the-Earth Inner World Adventure, and the Gothic horror novel The Cast Away added further depth to the ever-expanding Infinite Horizons universe. All the Pulp Heroes and Modern Marvels novels are written and illustrated by Wayne Reinagel, creator of the Infinite Horizons universe. Each of these epic novels feature incredible, full-length stories like nothing you've ever read before.

Knightraven Studios, an independent publisher, has been dedicated to serving Truth, Justice, and the American Way since 1980 and extends an invitation for you to explore the incredible Infinite Horizons universe!

Looking for thrilling, action-packed stories, with lots of fun? Pulp era adventure at its best? Lightning in a bottle? Novels guaranteed to knock your socks off? We highly recommend you climb aboard and enter the Infinite Horizons universe!! All of the aforementioned novels are currently available in print and digital formats. They can be found at Amazon, Barnes & Noble, and book shops worldwide.