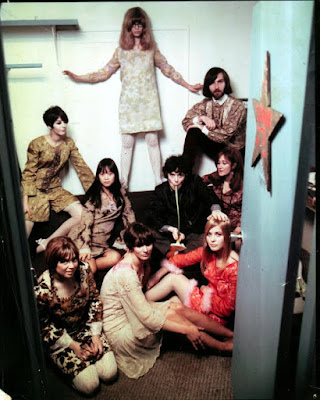 The day after she returns from the 2014 San Diego Comic-Con International, comics icon Trina Robbins sits down with me outside at a café just around the corner from her home in San Francisco’s Castro District. As we talk and eat, trains from the Muni Metro railway come thundering by. Robbins’ partner, Steve Leialoha, a comic artist for Marvel and an inker for the DC/Vertigo series “Fables,” arrives fresh from Comic Con with his bags and joins us at the table for half an hour or so.

“When I got to San Francisco in 1970, I discovered that maybe it was the mecca of underground comix for the guys, but not for the girls.”

As both a comics creator and historian, Robbins is particularly interested in the unknown history of female cartoonists and the ways they were celebrated and thwarted throughout the last century. Late last year, Robbins published a Fantagraphics book called Pretty in Ink: North American Women Cartoonists, 1896-2013, and now, the Cartoon Art Museum in San Francisco is presenting an exhibition of Robbins’ personal collection based on the book.

The subject is particularly relevant right now, given that new comic-book-based movies are hitting the big screen every few months, yet not a single one has revolved around a female hero. Marvel has taken bold steps by making a Pakistani American teen the new Ms. Marvel, in a comic-book series written by a woman, and turning Thor into a woman in its upcoming revamp of the series. At the same time, the major publisher raised feminist ire with a sexualized variant cover of its new Spider-Woman series. If a woman had drawn Spider-Woman instead of a man, it’s unlikely she would have sacrificed the hero’s comfort and mobility in favor of an erotic pose.

Robbins knows something about the glass ceiling for women cartoonists because she first hit it herself in the early 1970s, when she tried to join the male-dominated “underground comix” movement based in San Francisco. After the men cartoonists shut her out, Robbins joined forces with other women cartoonists to create their own women’s-lib comic books. She went on to become a well-respected mainstream comic artist and writer, as well as a feminist comics critic who’s written myriad nonfiction books on the subject of great women cartoonists and the powerful female characters they created. Naturally, Robbins has spent some time hunting down the original cartoons from the women who paved the way for her career, and as luck would have it, she found the very first comic strip ever drawn by a woman, “The Old Subscriber Calls” by Rose O’Neill, practically in her backyard.

Read the full article: http://www.collectorsweekly.com/articles/women-who-conquered-the-comics-world/
Posted by seanhtaylor at 8/18/2017 11:00:00 AM