This story originally appeared in Cyber Age Adventures Magazine and is collected in my short story collection Show Me A Hero by New Babel Books. 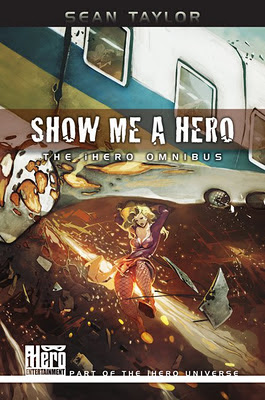 The woman across the table from me wasn’t really a woman at all. She had no real skin to speak of or any kind of humanity other than the feminine shape she had forced her new body of light and energy to look like. Her arms and legs may have been covered up with regular clothes like the rest of us wore, but the way I could see through the parts of her shiny, twinkling form that weren’t covered by clothing reminded me all over again how she was no longer human.

She was something else.

Her name was Nancy Elliot, but most of the world knew her as Starlight. A superhero. A woman who had lost her body years ago and had become a freak.

“We love our little girl, Ms. Starlight,” said my husband, Chris. “It’s not like we don’t want her.” He sat beside me,  his hands gripped together in one tight fist, his muscles as tense as his mind had to be. Putting words into the air for both of us. Trying not to make us sound like monsters. “It’s just that I don’t think anymore that staying with us is what’s best for Mackenzie. I think she needs parents who can understand her situation and deal with it better.”

“It takes one to know one, huh?” asked the Elliot’s attorney, a tall man with dark hair that had introduced himself as either Tom or Thomas or Tommy.

Nancy placed her hand on his shoulder. “I’m sure that’s not the way Mr. Brown meant it.” Her fake face looked calm and compassionate. Like a mother’s face. “I’m sure this can’t be easy for them either.”

Her husband sat beside her, wearing a dark blue suit with white pinstripes. He looked like a lawyer himself, but he kept quiet, saying everything he needed to by saying nothing at all.

“I only mean that Deidra and I aren’t really capable of taking care of someone like little Mackenzie. We’re just just not physically or emotionally prepared to cope with the responsibilities of having a child that can burst into flame at a moment’s notice.”

“No parents are ever prepared for their children, Mr. Brown,” Nancy said.

I wanted to tell her that, although she was right, this went far beyond that. That a few months of sleepless nights or constantly having to clean wet bedsheets were quite a different matter than never being able to touch a child without wearing asbestos gloves and being turned down for every homeowners’ insurance policy we applied for when they discovered our daughter’s unique talent for setting herself and her surroundings on fire whenever the mood struck her.

But I didn’t. I couldn’t. She had lost a son only a few years ago. A normal son. One born to her before she became a freak. And MacKensie Elizabeth Brown, born December 17, 2003, had been my first and was my only, so what right did I have to correct a mother who had been through far more than I had?

So I merely shuffled my hands in my lap and nodded, then I smiled at her and her husband, then glanced back down into my lap.

Our attorney, or more correctly, the attorney we had hired just to take care of the adoption process, rifled through the stack of papers in front of him and cleared his throat. “If you are ready, we can sign the papers now,” he said, reaching into his pocket for a pen. He pulled out four and handed one to me, one to Chris, and one each to Nancy and her husband. “I’ve gone through the trouble of highlighting the areas to sign in yellow and marking them with an ‘X’ as well. A little overkill in preparation never hurts, I always say.”

I took a pen and looked at Chris. He forced a smile and looked back at me, then looked away toward the corner of the ceiling. I dropped the pen onto table.

I wished then and there that some—What do they call them? Supervillains?—that some supervillain would begin a rampage downtown and Starlight would get a beep on her pager or special phone, or whatever people in authority used to contact super types, and she’d have to leave and allow me a few more moments of motherhood, a few more minutes of being a parent of a child I didn’t need and couldn’t raise.

Just a few seconds more of living without the guilt of giving up on a child I didn’t want to accept the responsibility of raising.

But there was no beep, no call, no interruption. Only her calm, understanding smile that she drew in the air with light in an attempt to make us all feel at ease around her.

“Nothing,” I said. “I thought there was something I wanted to tell you, but I guess there really wasn’t.”

She reached across the table for my hand, and I let her take it, if just to know what her artificial touch felt like. “It’s okay,” she said. “I know this has to be difficult for you.”

Her hand felt somehow cool and warm at the same time, like a weird combination of thin metal and a light bulb. I said, “Thank you,” and let go, then settled back into my chair.

Our attorney distributed sets of documents to each of us, indicating where to sign and what parts of the page we might most like to read over before agreeing to, and I signed as I was instructed, barely listening and centering my gaze on the highlighted ‘X’s on the back page of each form.

After a few minutes, he stopped passing around papers and instead gathered them all in front of him and began to sort them into three stacks. The center stack, the largest of them, for him to file with various agencies and in his off-site storage should Mackenzie ever decide to look us up once she grew up. The two smaller stacks were for us and the Elliots to keep or burn or lose or file away.

There was a lot more talk, all friendly and agreeable and tending to go along the lines of how this decision was really best for all of us, and how Chris couldn’t think of a better couple to raise our daughter, and how much Nancy and her husband had been looking forward to having another child after their youngest boy had died of luekemia. We stood up and hugged each other and cried, and the attorneys shook hands and exchanged a second set of business cards.

And it was over.

On the way outside, I followed a few yards behind the Elliots, watching as they walked to their SUV, like a normal couple. Nancy’s husband opened her door, then closed it after she stepped inside, then made his way around to the driver’s side and got in. I wondered why she didn’t just fly to pick up Mackenzie. After all, that was how they got around, right?

Chris came up behind me and put his arm around my shoulders. I pulled in close to him.

“Her hand. It was like nothing I’ve ever felt before.”