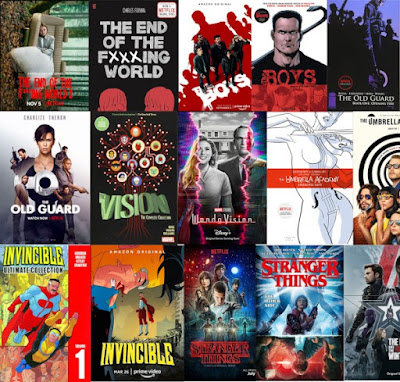 As the number and popularity of such streaming services as Netflix, and Disney+ continue to grow, many of these services have turned to adapting comics and graphic novels which have gone on to become some of their biggest hit shows.

Comics properties that have been adapted range from eccentric indie comics titles–for example, Charles Forsman’s The End of the F****** World on Netflix–to highly promoted superhero franchise series, among them WandaVision on Disney+ and The Boys on Amazon Prime. All of these shows have led to increased graphic novel sales, but along the way publishers have had to adapt and find new strategies to capitalize on their popularity on streaming media.

Among the challenges publishers face is the effort to link book releases to streaming TV shows: these services often don’t publicize broadcast dates until only a few months out. This means that publishers have to guess what the print demand will be, leaving them a narrow window to prepare. This can mean that books will be out of print for months just as demand spikes, unless publishers turn to more costly printers located in North America that can print and ship books to bookstores and comic shops more quickly.

One of the earliest (and most surprising) streaming successes based on a graphic novel was Forsman’s TEOTFW (as it’s called by many publications), the story of a teenage sociopath and a bratty thrill-seeker on a roadtrip, which was initially published as a series of mini-comics before being collected into a book by Fantagraphics. TEOTFW was published just as the streaming wars began heating up in 2017.