Occasionally on my Facebook page I post these sarcastic little #seantaylordestroys posts outlining what I'd do to a few core pulp and comics universes and how smart the DC and Marvel are not to give me the keys to their toys. Here's one I was really proud of.

In the ongoing saga to prove how unfit I am for writing for the "Big Two," I present The New Titans Multiversal Jaunt I call "Booster's Titans!"

On a dark little planet in the dirtiest depths of the DC multiverse, a college brainiac named Michaela Cortez traverses the multiverse on a fantastic joyride -- until the day she returns to find it under the iron fist of her world's version of the grown-up Teen Titans. Thanks to a "Tower of Babel" style contingency plan, the Titans are undefeatable by any of that world's known heroes.

So Michaela adopts the name Booster Gold and ventures back out into the multiversal timeline to track down heroes who are familiar with the strengths and weaknesses of her world's core Titans (Dick, Kori, Garth, Roy, Donna, Vic, Wally, Rachel, Kon'el, and Gar) but whom his world's Titans know nothing about (since they didn't exist on her world).

Michaela finally tracks down eight young heroes with ties to the Titans she is convinced are the heroes she needs. But she must not only convince them of the truth of her mission but also earn their trust and prove herself an ally as she gathers her own "Magnificent Eight" to save his world. 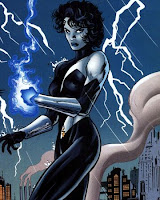 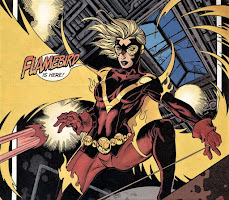 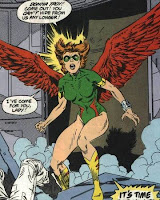 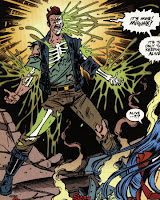 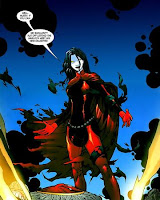 But don’t forget about Michaela’s roommate Teddy Cordova, who becomes a brand new hero called the Blue Beetle, after she picks up from Michaela’s tinkering with some weird alien tech she picked up on her joyride through the multiverse before getting serious.
But will they be enough to take on a legacy team that defeated their entire world? I guess we'll never know. Hehehe. Ain't I a stinker!
Posted by seanhtaylor at 7/29/2021 11:00:00 AM