Listening to Your Characters 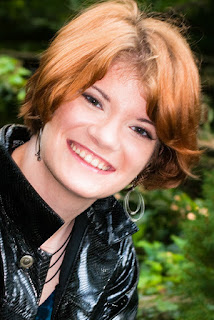 I love genre fiction, obviously, but sometimes it seems authors get too caught up in tone, too worried about making it fit a niche. They’re so busy trying to make horror scary, sci-fi exciting, and fantasy fantastic, that the story loses something. You can have the best plot-twist in the world, the coolest action, the dreamiest settings, but if your characters feel like they’re stereotype fillers that have been seen fifty billion times before, you’re in trouble.

Characters aren’t there to just move the plot along. Even the reason behind why a reader loves a protagonist or hates a villain – even if they can’t verbalize the why behind it – is important. Your characters deserve to be brought to life, to have that little something more that makes a reader feel something when they’re cut down or finally reach safety. For those cool plot points to mean something, the characters have to mean something. They have to fit the story and vice versa.

I’ve read a lot of great stories that suddenly become disjointed along the way, completely throwing off the wonderful vibe they’d had going on, because out of nowhere it felt like the characters changed and didn’t fit in their own story. Don’t get me wrong, we all get excited about particular plot elements that are going to blow minds, we all get nervous about word counts, but if an author is intent on getting the best possible story, sometimes you need to stop yourself in your tracks and listen to your characters.

Would they actually react to a situation the way you assume they would? What might actually come out of their mouths if forced into the specific scene or confrontation you have in mind? If you’re honest with yourself, the answers might surprise you. 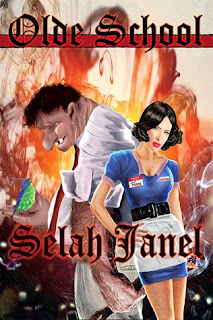 When I wrote Olde School, I was intent on giving it what I assumed was the logical, desired, movie-grade ending: hero (albeit an unconventional one) mans up after being down on himself, has an explosive fight with evil creatures, then finds himself presented with a bigger mystery.  Yay, done, let’s celebrate then point me to book two.

It sucked. A lot.

I quite possibly had twenty nervous breakdowns because I had no other options at that point, and couldn’t understand why things weren’t working, why the ending I had in my head just blew so very many chunks on paper. It was everything I’d set out to write, but the last fourth of the book felt off. A lot of well-meaning people tried to reassure me that I was just nervous and it’d all be fine after a few little tweaks. Here’s the thing, though.

I knew something was wrong.

I almost always know, honestly. It may take me a while to figure out what, specifically, needs fixing, and I absolutely hate being in that place, but I always know.

I think, quite honestly, a lot of us know things could be tweaked if we’d calm down about all the cool stuff we’re doing, stop playing God for five minutes, and really, really listen to our characters.

Paddlelump the troll, my hero in the book, is many things: likeable, smart, savvy, trusting, compassionate…but he’ll never be an action hero. Mad Max or a fantasy story Terminator he ain’t. If confronted with Aragorn, he’d sit the guy down and want to hear his life story. In short, he is not a fighter, and by trying to force him into that role I made us both wildly uncomfortable.

I often do that crazy author thing of letting my characters talk back to me, but in this case, it just ticked me off. Unfortunately, Paddlelump’s so nice that he wasn’t really one to offer much help other than “Oh, I dunno, I just don’t want to bother you, is all…”

And then I’d get irritated and go off to watch Masterpiece Theatre and binge on chocolate.

Welcome to my headspace. 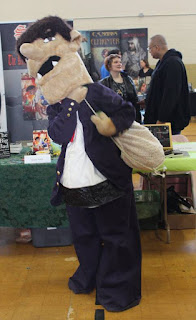 Truth is, he’s more of a listener, an empathizer than one to throw punches. When I not only realized that, but also took into account which other characters were in climactic scene with him, a completely different chain of events hit me….in some ways, the “real” sequence of events finally found me. It wasn’t what I had originally had in mind—was nowhere near it—though it still fused nicely with the overall direction of the book and the series. It meant a lot of cutting, a lot of rewriting…and a much, much better last fourth of the book. What takes place is much more unique to Kingdom City and to Paddlelump…and honestly, to me. In trying to force a fantasy-adventure vibe in that sequence, I had nearly lost the delicate balance of weird I’d worked so hard to create.

Sometimes I need to check myself, just like anyone else, and luckily I have many full casts lodged in my brain to do it. That makes me wonder, though, about what would have happened if I’d tried to force my way through ‘til the end. It makes me wonder how much of the stilted scenes and weird-feeling books I’ve read are actually authors hell-bent on ticking plot points off their mental list or outline. Style-wise, I get it, but story-wise? Sometimes you have to turn style and genre on its head and look at what’s actually going to be the best option. Sometimes you have to abandon those grand plans and leave things to those who know it best.
Posted by seanhtaylor at 6/09/2015 11:00:00 AM