Origin Stories (On Becoming a Writer)

When and how did you know you wanted to be a writer?

Bill Craig: I knew that I wanted to be a writer by age 6. I practiced and practiced until finally at age 40 I published my first book, Valley of death featuring Jack Riley. So it only took me 34 years to become an overnight success. After writing the first four Riley books I wrote Emerald Death, the first book in the Hardluck Hannigan series. Then I wrote Scorpion Cay, the first of the Decker P.I. books. Now fifteen years later I have published over 52 titles and had 8 amazon.com best-sellers.

Frank Fradella: In New York in the 70s, ABC aired something called "The 4:30 Movie," and it was known for spending a week on one actor or theme. I would watch those every day after school, but one Monday, I sat down to watch "Ape Week" on the 4:30 Movie and I saw "Planet of the Apes" for the first time. When I saw the Statue of Liberty coming up out of the sand... that was it, man. Game over.

Armand Rosamilia: I knew at age 12 when I began reading my mother's Dean Koontz books. That was it for me. Never wanted to be anything else but got sidetracked until four years ago to write full-time and live the dream

Tamara Lowery: Around ninth grade, I started to realize I wanted to be/was a writer. Granted, my initial bent was toward newspaper journalism. I fantasized about being a newspaper magnate in my later years. Still, I also had a strong desire to go into comics as both a writer AND an artist. For now, I am happy being a published author of fiction. It is more honest than what passes for journalism these days.

Selah Janel: I've always been surrounded by storytellers and stories to some extent. At some point it was a natural progression from playing pretend with my dolls to writing those adventures out (badly) on my toy typewriter. I always loved writing assignments in school, and in grade school, at least, always at least figured I'd be a writer at some point. It was a very natural assumption, the most easy thing in the world. I needed stories like I needed food and water. Later, when I had assignments and contest entries picked apart and I realized it was way harder than I'd thought, theatre filled that void. Still, part of the reason I love theatre is because of the stories and the characters, so when I started writing again as a hobby, then for real, it was never a conscious decision. It was something I needed, that natural extension of myself I was finally using again.

Marian Allen: I was read to every night, as far back as I can remember. When I was preschool age, Mom took me to a re-release of Bambi. In one scene, Thumper recites a poem with a funny last line that he said he made up himself. I said, "You can't make stuff up yourself!" (Although I imagined myself in those stories they read me ALL THE TIME.) When Mom told me somebody made up that whole movie, that people had jobs making stuff up -- MAN! That was all I ever wanted to do.

Ellie Raine: I actually never thought I'd write anything in book form at first. When I was twelve, I was strictly an aspiring game designer. Then a comic artist. Then a game designer again... you get it. I knew I wanted to create stories, but the medium by which TO create them would constantly change all throughout middle and high school. It wasn't until college that I took my first creative writing class, transposed my game idea into book format, that I realized writing in prose gave me the exact thrill I was looking for when it came to creating stories. Ever since, I've still delved into comics and games, but books have become my center of focus and devotion.

Nikki Nelson-Hicks: I started for the same reason as a lot of people start writing: to seduce someone. It didn't help I was fourteen and he was my English teacher. I would write stories and leave them on his desk, or slip them under his door, or (and I swear this is true) slip them under his truck's wipers and wait to see if he got them. I loved that man with all the fury a fourteen year old virgin could muster. He responded by getting me involved in the Gifted and Talented program where I fell into acting and met the boy who would become my husband. True story.

Franklin Antonio Fritts: I'm not very good at writing. So I do my comics backwards, it goes from what I want to accomplish in my issues, to being drawn, then I play all the characters and write what each says. As far as writing scripting it's a challenge but I'm slowly making the transfer one note pad at a time.

Rebekah McAuliffe: When I was in first grade, our class was required to participate in our school's Young Authors competition. With the help of my 8th grade tutor, I wrote "My Alabama Vacation," about a little girl (me) who was going to a zoo in Alabama. It really had no plot; it was more exploratory, talking about what the narrator did on the way there. I was really proud of my work, and I won second place in the schoolwide competition! However, I was (and still am) EXTREMELY competitive, so the fact that I only won second place still tore me up. The first prize went to another kid in my class named Nicholas Gilmore, who wrote a story called "The Last Dinosaur." I was extremely jealous of him, not only because he beat me, but because he got to receive a shiny medal (a dream of mine at that age). I swore from that day forward that I would hone my skills as a writer so I could one day kick Nicholas' little ass. However, Nicholas transferred out the next year, and there were no more Young Authors competitions. Nevertheless, I kept writing and writing. Fast forward to seventh grade. When I heard that Young Authors was still a thing, I was ecstatic. I wrote a short story called "Chapparelle's World," a tale which can be described as Edgar Allen Poe meets Alice in Wonderland about a young woman who confronts her demons while she is in a coma after a failed suicide attempt. Despite its darkness (or perhaps because of it), I won my schoolwide competition for my grade, and advanced to the county semi-finals. While I didn't advance past that point (looking back, there were a lot of problems with the story), I realized something: sure, the awards were nice (I even won a medal), but I actually really liked writing, and if I was going by the opinions of my peers and teachers, I was good at it. I've been writing ever since.

H. David Blalock: At the age of 7 or 8 I began reading science fiction, specifically Heinlein's Red Planet. I was hooked on reading scifi and eventually knew I had to try my hand. Over the years, I learned that writing is kind of like an addiction. You might be able to walk away from it for a while, but you can never leave it completely. 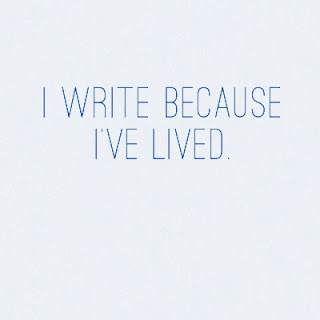 Stephanie Osborn: I'm not sure, really. I always enjoyed writing. I wrote a play in 4th grade that, while horribly derivative, was evidently good enough that the teacher let me cast it and produce it for the class. I started writing some poems in 3rd grade, I think it was. Not in class, just that's how old I was at the time. And I've written ever since.

Around, oh, 15 years back, I tried my hand at franchising one of my favorite movies, with my husband's encouragement. That was the first I realized there were entire books inside me. I never cracked the franchise because of the way the rights were tied up, but wound up eventually getting my own stuff out there.

I never really said, "Hey, I wanna be a writer," until after the Columbia disaster. After that, staying in the space program stuff was just too painful, and I already had this writing stuff going. So I decided to take some time off and see if I could make a go of it.

And here I am. I dunno that I've made a go of it, but I'm sure having fun with it.

Jim D. Gillentine: I first felt like I wanted to be a writer was back in the 8th grade. In English class we had to write a folktale about something, and the teacher said she would have us read the best one that was turned in. I wrote a story about how the Mississippi River was formed form the tears on a Native American woman who's lover was killed in combat. My story was the one chosen to be read in class. That gave me a good feeling to hear others read what I had created. But I did nothing about it for years until a certain story about an immortal monster by the name of Andrew Bane from my novel 'The Beast Within' showed up in my head. I had to get his story out there! He would not leave me alone until his story was told. So...I did.

Percival Constantine: I was ten when I wrote my first story and really enjoyed doing that. Then I just kept going and never really stopped. Wrote terrible original stories in elementary school and junior high, then later began writing fanfic and started to learn how to write scripts in high school, and started to really find my voice in college and beyond.
Posted by seanhtaylor at 6/04/2015 11:30:00 AM