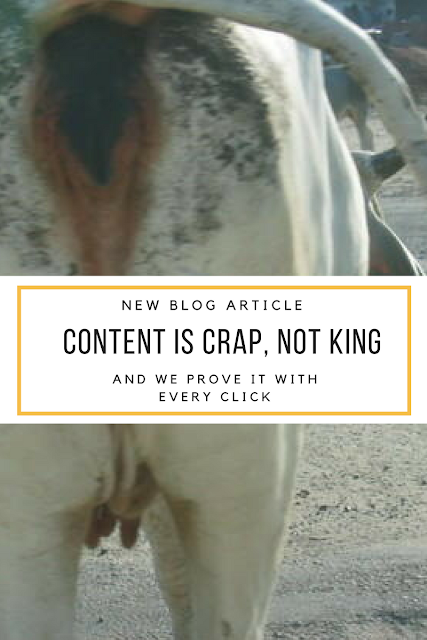 You hear it all the time: Content is king. But I'm just going to call that out right now as a bunch of BS. In a world where "7 Ways to Get One Million Hits" and "You'll Never Believe What She Does Next" go viral while great content from lots of gifted creators sits in hidden pockets of the Internet ignored, content is nothing at worst, added-value at best.

Here's another truth: Clickbait is king. It's also queen, prince, princess, and all dukes and duchesses down the line.

And here's another truth for you: Time-wasting is the king's right-hand man.

I'm betting I'm not the only blogger/writer/artist/content creator to feel this way. So feel free to file this post in the "I'm not alone" file when we're done. But for now, let's hear what the ol' schlub has to say.

As a blogger who puts lots of time, energy, and love into what I think is a pretty solid blog about genre writing, filled with peer-filled interviews and roundtables, articles about genre topics, submissions opportunities, tutorials, and lots more, I get excited when I look at my stats and see the counts go up.

I know I'm like the schlub with 15 subscribers to his YouTube channel about something substantial while next door the channel about cats winking at each other and the teenager going on an uninformed tirade about politics are breaking the Internet with their 2,000,000+ views.

I value every individual number I see when posts start to get just a few more readers than that previous. And I treasure each share on Facebook, arrow up on Reddit, and RT on Twitter. Because each one of those was someone who liked what I had to share, who found value in it, who felt it added something to his or her day and thought it might just do the same to someone else's day.

It's a different mindset, I think. Coming from a publishing background, I want to give people something meaningful. If not, why publish anything? Ever? To bore readers? To make them dumber?

I'll admit it. Sometimes I've thought about changing over to clickbait headlines for the articles on the blog to see if they make a difference, but I always stop myself because I fear they will, and then the point of what I'm trying to do sort of falls off to the side.

Do I think headlines like these would attract more views?


Sure they would. But they wouldn't be honest. Seven methods for me might not work for you, and just what the heck does "best-selling" even mean anymore in a world of manipulable data from Amazon sub-sub-sub-charts? And yes, some sinister e-self-pubbers are still out there, but the POD marketplace has also helped to level the playing field for mid- to low-run presses. And, of course, you can never really believe the kind of crap some publishers are putting out there.

However, we see the success of this crap all the time.

We all complain about them. All of us who claim to want real content avoid them like cliches and sentences that end with prepositions (or like weak verbs supported by adverbs) -- or so we claim. Somebody is looking at them. Lots and lots of somebodies. Pages of comments run behind these "articles" like the tales of dragons.

Then I look at my little blog and see very few comments. Only a few shares from the actual blog. And that's even when the number of views is going up. Click. Take a peak. Maybe even read it all. Then disappear without so much as a word.

The Blind Talking to the Mute

It's not apples to apples. I know that. It still makes a serious blogger want to give up some days and just re-post pictures of cats eating oranges and memes about which Harry Potter character my mother-in-law's neighbor's puppy is.

I hope it's that the audience I've chosen to pursue is so busy writing their magnum opuses they barely have time to read an article, much less comment on one. I hope it's that every other writing blog, Facebook group, or Reddit community out there is competing for the same small slice of target audience that I am, and they're already overwhelmed by the sheer volume of writing-related sites.

Even so, it would be nice to have a comment every now and then. Until then, we are the blind talking to the mute, not really knowing if the listener is out there or not.

All this leads me to this little nugget I'm just now trying to wrap my head around. If all this is true, if readers are doing me a favor (instead of me doing them a favor by providing unique, meaningful content) by granting the benevolence to increase my hit count, then what's the point?  If just clicking onto my blog is them being good friends and doing me a solid, so to speak, so they can hurry back to reading spoilers for Batman or watching two pandas splash water at each other, then why do I even keep such a resource online?

I think -- and I'm still struggling with this one, so give me time -- I think I know why. Because I do it for me ultimately. I do it because I want to give something of myself to other writers. Because I think that's something worth doing.

It's just that how does one learn that he's doing something worth doing if the the audience he's doing it for rarely responds with more than a visit? Or is that his answer -- that what he's doing doesn't really matter and the lack of response is the proof?

It's a conversation I have regularly with many of my writer friends. The meme is all over the web -- Make a writer happy by leaving a review.

The meme itself gets lots and lots of likes, but do the "likers" actually take the effort to go leave a few words about the book?

Rarely, because there are more important things to see, like the photoshopped image of Baywatch stars on the bridge of the Enterprise.

It's why so many groups grow stagnant, so much discussion fades away, why other writers whose perceptions and thoughts I value give up sharing them after 5 or 6 posts. It's not that they don't have anything to say. It's that it's not worth it when the return on the time invested is so close to nil. It's like yelling into a storm at best, or, at worst, speaking into a room full of peers who are all ignoring you. "I tried, Sean," they tell me, "But nobody really seemed to care."

All I do know is that if content is still actually king, then somewhere, some-when the definition of content was abducted and replaced with a pauper who, in this case, doesn't even look the part.