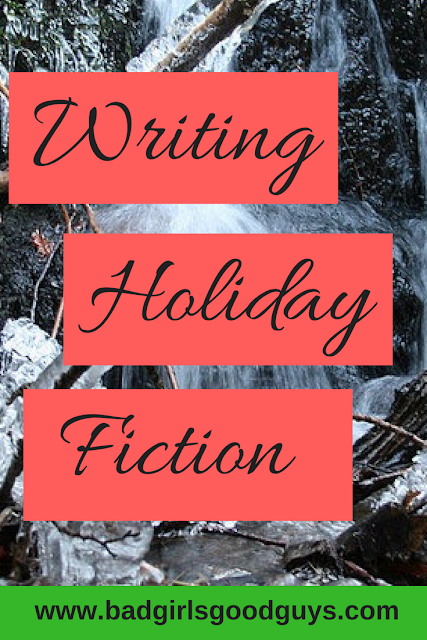 Let's get seasonal, all you writerly girls and boys. This week we're going to look at what goes into writing great holiday stories. 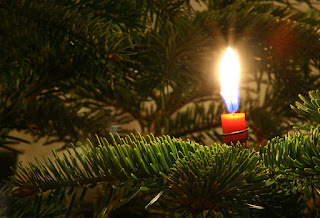 Lucy Blue: I think seasonal fiction is popular for the same reason some people start listening to Christmas music the day after Halloween. Readers want to cocoon themselves in that warm, fuzzy holiday feeling, and publishers are more than happy to feed that to make a buck. And writers are as susceptible as readers. The first time I see those Hershey's Kisses playing handbells or hear Nat "King" Cole, I want to drop every other project and write a Christmas story. Sadly, that's only about six months to a year too late to effectively publish, but never mind - so far, Christmas always comes back around.

Selah Janel: I think it has certain themes, tropes, and archetypes in a way that a lot of people relate to. Everyone has some sort of relationship with the holiday, good or bad, included or excluded. At times holiday fiction can be a comfort during a stressful time, at the extreme, some types can be an anesthetic. Because the go-to is cozy holiday stories, it's also ripe for subversion in the dark fiction genres, too, because that inversion can be really jarring.

Sean Taylor: Seasonal fiction taps into the general positive vibe of the holidays. It is able to reinforce those happy thoughts of holidays past and, if done well, cause the reader to reflect on something else to make their season a little more exciting, or spicy, or romantic, or action-packed, or just plain on more filled with warm fuzzies.

Do you find it to be as good as "regular" fiction, or does it tend to be mere marketing and/or sentimentalism?

Sean Taylor: I'm a bit of a snob, so I tend to find a lot of holiday stories to be melodramatic drizzle designed to cater to the easy plots and tired tropes of either love lost and rediscovered just in time for the holidays or to the Christmas Carol model of someone learns the "true meaning" (insert the author's personal definition of that here) and makes a permanent change for the better. I don't, however, find some truly enjoyable -- even to my snobbish tastes -- holidays tales. 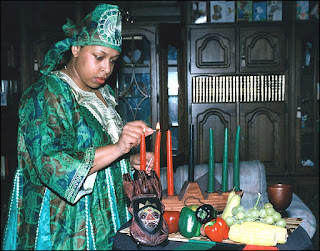 Selah Janel: Depends. I've read enough to be able to tell when it's hitting an obvious formula. There are tons of bland or plain not great holiday fiction out there, but that doesn't mean they don't speak to someone. When it's done super well, whether it's because of well-developed characters, use of obscure folklore (because this time of year is FULL of it), or just really taking a chance on an unconventional plot choice (and doing it well), holiday fiction can strike a chord in people and be really exceptional.

Mandi Lynch: Depends. I've found both - but then again, I find good and bad in all genres. Depends on who writes the story.

Lucy Blue: Some genres lend themselves more to holiday stories than others, and their publishers quite obviously know it--the mainstream romance Christmas cowboys start riding onto the shelf at Wal-Mart by mid-October. But my hubs played a Christmas-themed DLC mission for Hitman last weekend, so no genre or format is entirely immune. I think a lot of them ARE callous cash grabs, playing on our sentiment or feeding our contempt. The overarching theme to almost every holiday romance is "You don't have to be alone at Christmas." The overarching theme to almost every holiday horror or pulp story is "You're smart to hate Christmas." The overarching theme to almost every science fiction holiday story is "Christmas is an illusion." As readers, we look to these stories not so much for originality or art but to find confirmation of our own feelings about the holidays. And as writers, we do the exact same thing. I don't think this makes these stories worse than "regular" fiction; they just have a somewhat different purpose. But because of that, they aren't nearly as effective in July. (There are many, many notable exceptions, of course.)


What makes for bad or mediocre holiday fiction?

Mandi M. Lynch: A story that's too worried about the pretty to worry about the storyline. It's fine that you want to describe all 42947 ornaments on the tree, but there needs to be something beyond, too.

Sean Taylor: Tired tropes. More Christmas Carol redunits. Anything that is satisfied with the low-hanging fruit of just warm fuzzies. A lack of surprise for the reader. And most of all, anything so steeped in sentimentalism that it requires more suspension of disbelief than an episode of Gumby.

Selah Janel: For me, if it's supposed to romance or a cozy read, it's bad if I can figure out the plot immediately, if the characters are cardboard audience-inserts, or if it tries so hard to be holiday that it breaks from reality. A lot of anthology Christmas reads are this way for me - maybe ok once but they fall apart on repeat reads. In the case of horror or even romance, if people try to be too out there or too clever-clever without backing up the idea with great plot elements and characters, it's just as lame. Everyone has done evil Santa, so if you make that choice you'd better give me a fantastic reason for it and a gripping plot arc. Every conceivable type of holiday romance has been done so if you go too out there, there'd better be some balance with the Christmas crazytown. The old legends work whether they're medieval or from different countries or what have you because they're short narratives. The moment you build on that with any holiday story, you need to be able to do it with some substance or else it's sugary icing with no Christmas cookie underneath. 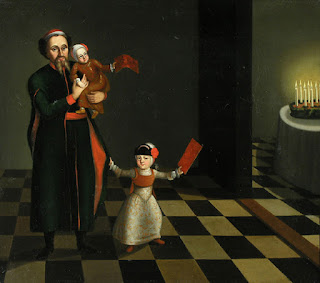 I've had mixed reactions to my title Holly and Ivy, but my intent was to show the good AND bad of the season. People struggle that time of year, just like any other. People still hurt, they still die, but there's also family and relationships and hopefully some comfort, as well. There's magic, romance, holiday cozy rituals, and some faeries, but at its heart, it's about the choices the main character has to make and how she tries to grow and do the right thing, just like so many of us do. It's about trying to find the bright spots when things are shadowing the season, and I hope that's something that people can identify with, because it's definitely something I face every year.

What elevates holiday fiction into something that still stands beyond the season?

Ryan Cummins: I'm going to use one of my favorite films here as an example, DIE HARD. People argue it's relevancy in the holiday genre constantly but what I love about this film is that it has a great story that just so happens to take place during the holidays. Would it have worked just as well if it was set during Labor Day? Probably, but the fact that they used the Christmas as a seasoning instead of the main course is what gives the story its charm. That's why no one ever debates whether DIE HARD 4 is a Fourth of July movie or not. As long as what is at the center of the story has an emotional pull for the audience, its place on the calendar should be of little consequence.

Mandi M. Lynch: A story where the main issue could fit without a holiday. Blaire could just as soon bring Enrique home in April, it would still make a story. Luther could still want to keep within his budget. Frohmeyer will still be an overbearing neighbor in summer.

Selah Janel: For me, if it connects with my actual life experience. I love On Strike for Christmas by Sheila Roberts because I know women like those characters. I grew up with similar traditions. I've seen that clash of wills. Likewise, I like the graphic novel Marvel Zombies Christmas Carol because it takes a gimmick but makes it make sense without going completely off the rails and destroying the original story. In both cases, you actually come to empathize with the characters and identify with the familiar holiday rituals. 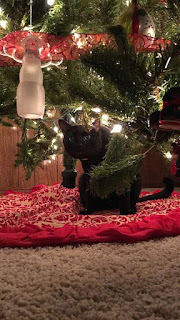 Sean Taylor: Personally, I think the best holiday fiction uses the holiday itself as setting more than marketing or moral. It should have something to say about the people celebrating the season rather than merely becoming more "true meaning of Christmas" propaganda. The characters need to be fully realized people, not just Colorforms stuck into the same old manger scene rediscovery or "Scrooge learns his lesson" fable. Regardless of the time period in which they are set, they should say something true and honest and meaningful to modern readers. They should get beyond marketing and be good stories... period.

Case in point, I can watch It's a Wonderful Life anytime during the year, as well as Gremlins and Die Hard, and even Scrooged, but not The Bells of Saint Mary's, Christmas in Connecticut, or any of the Hallmark seasonal movies. Why? It's the difference between being steeped in sentimentalism and using the season as a springboard to tell a genuinely human story.

And yes, mentioning Scrooged sounds like I'm disagreeing with my own criteria, but that movie transcends it's typical Christmas Carol plot in so, so many ways.

From my own work, I tend to use the holidays to let my characters reflect, but not in the traditional sense. I've had them have to figure out the true nature of being a hero while dying during the holidays, rediscover the spark that died long ago because of a robbery and a captive's life in danger, and deal with the life choices that led to going from superhero to street bum (and was it worth it?) -- and that's a far cry from your visits with family in the snow-capped mountains or your big-city lawyer discovers the true meaning of Christmas in the idealized, pastoral setting where his car broke down. But, to each his or her own.

Lucy Blue: My own holiday-themed writing usually comes from something silly. For example, the one and only Hallmark-Channel-ready, contemporary holiday romance I've ever written in my life, Jane's Billionaire Christmas, came about as I was watching a Southpark Christmas episode with my digital artist/writer husband. We were discussing how obviously the guys who make Southpark have some female influence in their lives--every once in a while, Stan's girlfriend, Wendy, comes out with a monologue that Justin swears I wrote. ;) And as we were watching, I was thinking, geez, what WOULD it be like to be in a relationship with the brain that came up with Cartman? Laws, can you imagine taking that guy home to meet your parents at Christmas? And out of that came a Christmas story that is very sentimental and romantic and smooshy, but also, I hope, very funny.
Posted by seanhtaylor at 12/21/2017 11:00:00 AM