The Language Barrier -- Tolkien Did It, So It's Okay, Right?

There's a well established literary history of writers making up words and creating new ways of communicating verbally, from the poetry of e.e. cummings and the plays of Shakespeare to the fantasy and sci-fi of classic and contemporary authors. But why and how?

Why create a new language for your story? What's wrong with the existing ones?

H. David Blalock: Precedent. The most successful fantasy stories have all contained "new languages." Tolkien intended to show how a totally new language could be built into a world with its own identity. Before him, men like Lovecraft, Ashton Smith, even Howard had already looked for ways to get around calling their otherworldly heroes and villains something more exotic than "Dave" and "Steve."

Percival Constantine: I personally don't see it as being necessary. When I read Fellowship, I skipped over most of the parts in Elvish (and the songs, and the overly verbose passages—I was not a fan). As a writer, I know I'm going to have to provide a translation for those passages anyway, so I just don't see much of the point. I know there are those who feel it adds some additional flavor to the story, but I'm not one of them.

What are the pitfalls of creating a made-up language for the world of your story?

Percival Constantine: I've done a bit (emphasis on "a bit") of linguistic studying and I think I know enough to say this: if you don't know what you're doing, don't create a whole language. Tolkien was not only proficient in a number of languages but also a professor of linguistics and definitely knew his stuff. Dropping in the occasional word here and there for flavor is one thing, but creating an entire language is something completely different. 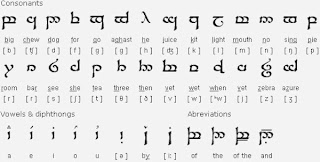 H. David Blalock: Invariably, fantastic names will run into pronunciation problems. The readability of the story is often crippled when the main character's name is hobbled with a lack or plethora of vowels, too many hyphens or apostrophes, or is just plain incomprehensible. Likewise for the language. The readers should be able to pronounce the words in their heads even if they get tongue-tied trying them out loud.

How do you go about the process of inventing new words and new ways of speaking? Do you build from existing language or start from scratch?

Jeremy Hicks: I find that it is much easier to adapt an existing language that is not heard commonly. Or seen in most forms of media. Anthropologists and linguists have been assembling extensive dictionaries and translations on most remote, dying, or dead languages, so you might as well put them to use for flavor. But do it systemically and judiciously. And like Perry said, preferably sparingly.

H. David Blalock: I try to use a language already in use as a basis. Not being a philologist, I don't have the expertise or the inclination to go through the agony Tolkien must have endured. My favorites to use are Norse, German, and Chinese. They can be twisted into some wonderfully bizarre, mind-bending names and terms.

Percival Constantine: I personally don't. I'll sometimes have a character who speaks in a manner that's strange (such as Liran in SoulQuest), but for the most part, I think you're better off focusing on the character development first.