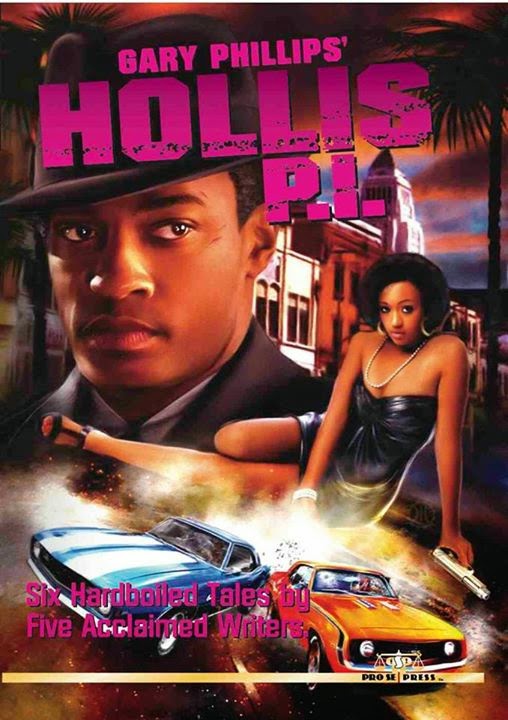 “I couldn’t be more pleased that Hollis returns in prose from Pro Se Productions,” Phillips said. “Readers are in for some hardboiled thrills as we put the redoubtable private eye through his paces -- from a ritual killing, the hunt for long-hidden swag, attack dogs in the dark, to the machinations of crooked politicians…tough guys and tougher women.”

Gary Phillips has penned short stories for Moonstone’s Kolchak: The Night Stalker Casebook, the Avenger Chronicles, the Green Hornet Casefiles and The Spider: Extreme Prejudice anthologies. His most current novel is Warlord of Willow Ridge. He also has out the eBook novella, The Essex Man: 10 Seconds to Death, a homage to ‘70s era paperback vigilantes. Additionally he is one of the editors for Pro Se's BLACK PULP volume, and any and all follow ups to that collection. In addition to editing and contributing to Hollis, P.I. for Pro Se, he also has for the press stories upcoming in Asian Pulp and Black Pulp II. He recently wrote the graphic novel Big Water, about the fight by a municipality to save its water from privatization; has a steamy story not for kids in 50 Shades of a Fedora; and is editor and contributor to the upcoming Day of the Destroyers, a collection of linked stories wherein Jimmie Flint, Secret Agent X-11 battles to stop internal forces out to overthrow the presidency of FDR during the Great Depression.

“PI Nate Hollis,” says T. Jefferson Parker, author of The Famous and the Dead, “originally sprang from the rich imagination of LA-based writer Gary Phillips, but he’s so real and tactile he could climb off the page and buy you a bourbon. Now, four other authors are getting a piece of Nate, too, and this latest collection of Nate stories is wonderful. This is contemporary noir at its best, offering all the familiar pleasures of the genre, but giving them a modern makeover. Yes, this is a violent world that Nate inhabits, but he steers a true and moral course through the layers of deception, skullduggery and sometimes worse that make these stories such high-density entertainment. Nate’s a great character and these stories do him justice and more. “

Gary Phillips’ Hollis P.I., features evocative and action packed cover art and logo design by Jeffrey Hayes. With print formatting by Percival Constantine, the collection is available from Amazon and Pro Se’s own store for $12.00. This modern mystery collection is also available as an eBook for the Kindle http://tinyurl.com/nje4y36 and in most formats from Smashwords for only $2.99.
For more information on this title, interviews with the author, or digital copies for review, contact Morgan McKay, Pro Se’s Director of Corporate Operations, at directorofcorporateoperations@prose-press.com.

To learn more about Pro Se Productions, go to www.prose-press.com. Like Pro Se on Face book at www.facebook.com/ProSeProductions.
Posted by Unknown at 12/13/2014 11:00:00 AM