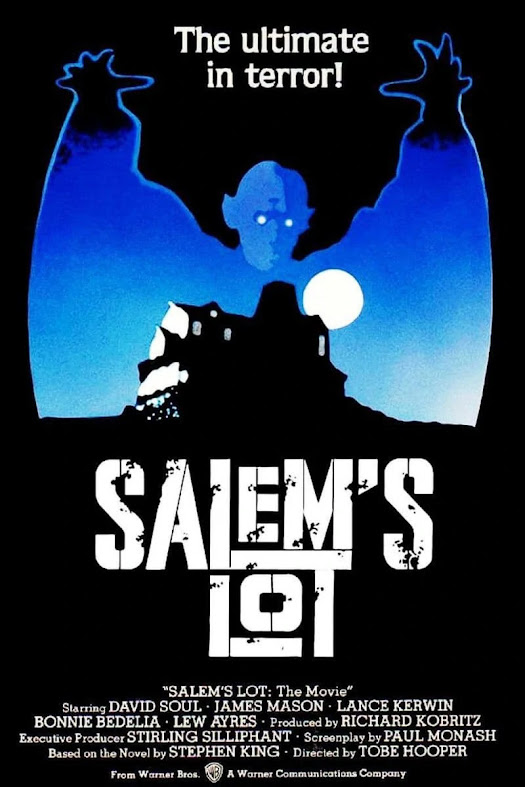 Stephen King is perhaps the writer most guilty (not that it's a bad thing) of using writers as his main characters. You'll find them everywhere in his work.
Secret Window. The Shining. Misery. But this wonderful vampire flick is often forgotten among King's writer stories.
David Soul (Starsky and Hutch) is Ben Mears, a successful novelist who has returned to the town in which he grew up so he can be near the old Marsten house, a building that has haunted him since he was a kid and that he wants to write about in his newest novel. Only, the house is soon to become a nest of creatures of the night that plan to take over the town of Salem's Lot. While most of the movie's plot is focused on the action of trying to fight the vamps as they grow in number and become an increasingly dangerous infestation in town, there are several moments when Ben gets to demonstrate the way being a writer affects his life.
For starters, perhaps the most common stereotype of a writer is based in the need to be valued as an author, to have been read, and to be appreciated for what he or she or they contributed to the world. When Mears goes into the local property rental company to see about renting the Marsten house, he is confronted by the owner Larry Crockett, played with subtle comedic panache by Fred Willard.

Crockett: Are you a writer?
Mears: Yes.
Crockett: What do you write?
Mears: Books.
Crockett: Have I read any?
Mears: Have you read any books?
Crockett: Your books.
Mears: I don't know.

I remember when I visited the library in the town I grew up in a few after I had become a published author, and particularly after having several books on the shelves in Barnes & Noble, and even one in Wal-Mart. I had a conversation very similar to this with the librarian when I dropped off a few of my books. While I was reminiscing about looking up "wrong" books and making out with my then girlfriend in one of the nonfiction aisles back in my younger days at that very library, she was gazing through me, ready to ask the question: "Anything I might have read?"
It's the question that sounds an awful lot like "Are you a New York Times best-seller or do you have a movie based on one of your books? If not, why would I care?"
It can hurt the first time you hear it. Then it becomes a sort of expected inside joke between you and every other writer you know.
There's a famous quote that goes like this: You can't go home again. There's a lot of psychological and emotional truth to that statement, but it's a truth we writers tend to ignore and always go back home again.
For some (like me) it's literally turning my MeMe's house into my preferred writer haven, physically going home (since we moved around a lot, MeMe's house was my only real home growing up) again to find my most at peace place to write.
For others it's returning to the themes and story ideas of our earlier work (whether finished or just old ideas jotted down in notebooks) to return home to the parts of you that made you want to write in the first place.
For Mears, it's a combination of both. The Marsten house has haunted him since he was a child, and he not only wants to return to it as inspiration for his new novel, but he also needs to return home physically to be near it (since he couldn't rent it himself and live in it to write). While on a date with a local teacher, Susan Norton, Mears confesses the following:

Of course Susan doesn't see. It's not her "home again." It's Mears' compulsion, not hers. Only he truly understands why he wants or needs to write about that house. Just like only you understand why you want or need to write about zombies or growing up in the city or raising horses or superheroes in space or, well, whatever.
Last, Mears has an opportunity to catch up with a former teacher, Mr. Burke to share something vital to all creators of fiction.

Mears: My name is Ben Mears. You probably don't remember me.
Burke: Of course I do. I've read your books.
Mears: I wouldn't have written them if it hadn't been for you.
Burke: You just said a very large thing. I'd like you to explain it to me.

For me, Mr. Burke was Ms. Geraldine Warren, my high school Literature and Composition teacher. She's the one who instilled in me a love for reading and writing. And Shakespeare, but that's a story for another time. At the college level it was an American Lit professor, David, with whom I became a friend over the course of the class (I really wanted to say "course of the course") and kept in touch with over lunch afterward. He ignited my zeal and passion for short stories.
It's Burke's line "You just said a very large thing" that resonates in this exchange, at least to me.
At the time they were inspiring me, neither David nor Ms. Warren knew anything about the thing they were causing to happen inside me. Hell, neither did I. Not really, anyway. Not fully. It was only in hindsight I could see the picture form in its entirety. And it was a very large thing. And I do wish I could let them both know now that "I wouldn't have written them if it hadn't been for you."
One has died, and the other has been lost across the changing of the Web from bulletin board systems to the original AOL to a real web of interconnected websites and various trendy email services of the moment. So, I really have no way to let them know.
All that to say, tell somebody if you still can. Find your Mr. Burke.
It's telling in this conversation that Mr. Burke actually knew about Mears' writing and had read his books, as opposed to the conversation with Mr. Crockett. The people who matter, ultimately really matter to you as an author, they'll know. They'll value you. They'll have read your work. They'll appreciate your contributions. And they'll have most likely been there throughout the journey in more cases than not. But you'll never know unless you let them know how important they are to your writer's life.
Posted by seanhtaylor at 4/13/2022 11:00:00 AM