Not So Famous Last (and First) Words 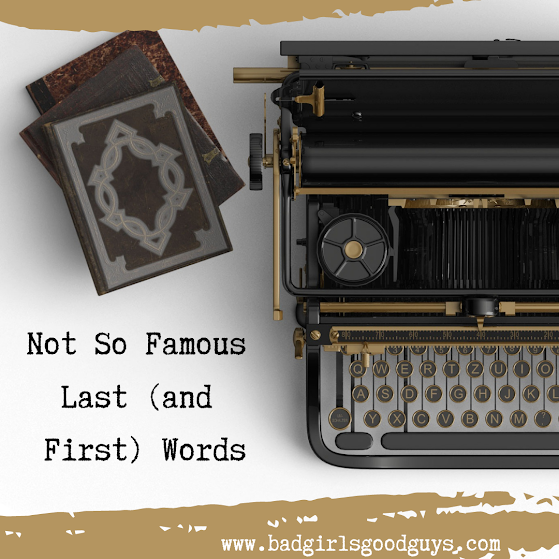 All writers tend to have their favorite opening sentences (or paragraphs) and closing lines from stories they've read. They tend to be so well know they end up on mugs and shirts and all kinds of what-nots and doodads.

You probably know the lines so well, I won't even have to list the sources. Go ahead. Try it.

But what about your favorite opening and closing lines from your work? Lay 'em on us. We want to know.

Sara Harvey thought she was doing pretty well until the corpse started in with the puns. -- Blackfire

It really was a dark and stormy night. -- A More Perfect Union

1st line; Orland squinted as he tilted the bottle.-- From an unpublished short story

Last line; As he hit the river, his hand closed on liquid nothing. -- From an unpublished short story

It's been so long I forgot how much I hate sportin' the aluminum underwear. -- One Shot, One Beer

Opening -- On a hot July day Mama went cracked, locked my sisters and me in the tool shed, and lit us up like a Christmas tree. - Of Lips and Tongue

Opening -- Opening: During my last days on Malachee, I told Diamondback Jack it didn't matter how many souls I sent to an early grave, I could only die once for my sins. -- A Fistful of Dust

Down rained the night, cloaked all in fire and brimstone. -- First line of Lucian

Hawk awoke naked and screaming in the heart of a shattered galaxy. -- First line of Hawk

The ghost of a god stood on a dead world and screamed his frustration at the shattered stars. First line of Kings of Oblivion

Everything you know about Genghis Khan is wrong. -- unreferenced

Nell cradled the semi-automatic assault rifle like a baby, keeping it close to her body and giving it plenty of support with both arms. -- unreferenced

To make the black cat bone, you have to boil the cat alive. -- The opening line from a horror/romance story in Eat the Peach, "Black Cat Bone"

Guess what, he told her, whispering in his mind, knowing she would hear him. I can do magic, too. -- My favorite closing, from The Devil Makes Three:

My wife and Lonnie's wife leant against the back door with their arms crossed over their chests and that blank look they always get when they're trying to decide whether to laugh or rip us new ones. --First line of "Lonnie, Me, and the Hound of Hell"

“You make me sick,” said Tartarus. -- Last line of Silver and Iron

Abraham Snow knew he was about to die -- and the thought of it pissed him off to no end. -- Snow Falls

She was alien, and she was going to die before he could find out where she came from. -- The War Dogs

The backflow regulator exploded in a shower of hot metal and sparks and this time it definitely, absolutely, was not Arin Riobi’s fault. Starfly lurched and threw Arin across the cramped compartment as it dropped out of hyperspace. Unintentionally. -- How Not To Hire A Mechanic

So you see, my darling. You're not the only one with secrets. -- Between the Layers, Book #3 in The Data Collectors trilogy

The woman across the table from me wasn’t really a woman at all. -- -- From "It's Christmas, Baby, Please Come Home," Show Me A Hero

The man who killed me wore a tattoo of Santa Claus across his chest. -- From "Sin and Error Pining," Show Me A Hero

The woman’s accent was just German enough to get his attention, all dripping with sexy gutturals and thick vowels, just exotic enough to trick a man’s ears into thinking he was having a drink with Marlene Dietrich instead of some two-bit nightclub singer in a no-account New York dive like Belle’s, but the comparison stopped cold at the woman’s voice. -- Opening from "Die Giftige Lilie,” The Ruby Files Volume 1

“Oh boy. I should’ve tried harder to get killed.” “Like I’d let you get off that easy.” -- Closing from "Die Giftige Lilie,” The Ruby Files Volume 1