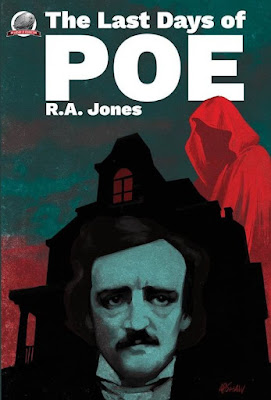 While on a trip to Baltimore, writer Edgar Allan Poe finds himself lost one night in the bustling new American metropolis. He stumbled upon a strange mansion on the city’s outskirts where he is welcomed by a bizarre figure to attend a garish ball.

The little guide, named Reynolds, wears a realistic head mask of a sharp-tooth dog and once inside the weird festivities, leads Poe to an upstairs room to meet his host. There assembled are six other wanderers also puzzled by their own presence there. When the master arrives, he is garbed in a long red cloak and hood and wears a frightening skull mask. He calls himself the Red Death and explains that they are invited to partake in a contest of spiritual survival.

If any of them can find the exit to the house, they will be set free. Whereas any who fail will die and their souls condemned to the fires of hell.

Writer R.A. Jones spins a fanciful tale of horror and human despair that unveils the true sins of six people and their desperate attempts to flee their own inescapable judgment. Artist Chuck Bordell provides the black and white interior illustrations and the cover is by the popular Adam Shaw.