[Link] Gabriel García Márquez, The Art of Fiction No. 69 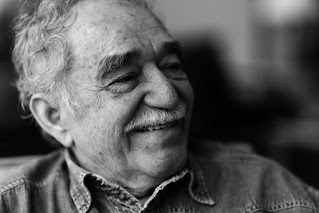 Gabriel García Márquez was interviewed in his studio/office located just behind his house in San Angel Inn, an old and lovely section, full of the spectacularly colorful flowers of Mexico City. The studio is a short walk from the main house. A low elongated building, it appears to have been originally designed as a guest house. Within, at one end, are a couch, two easy chairs, and a makeshift bar—a small white refrigerator with a supply of acqua minerale on top.

The most striking feature of the room is a large blown-up photograph above the sofa of García Márquez alone, wearing a stylish cape and standing on some windswept vista looking somewhat like Anthony Quinn.

García Márquez was sitting at his desk at the far end of the studio. He came to greet me, walking briskly with a light step. He is a solidly built man, only about five feet eight or nine in height, who looks like a good middleweight fighter—broad-chested, but perhaps a bit thin in the legs. He was dressed casually in corduroy slacks with a light turtleneck sweater and black leather boots. His hair is dark and curly brown and he wears a full mustache.

The interview took place over the course of three late-afternoon meetings of roughly two hours each. Although his English is quite good, García Márquez spoke mostly in Spanish and his two sons shared the translating. When García Márquez speaks, his body often rocks back and forth. His hands too are often in motion making small but decisive gestures to emphasize a point, or to indicate a shift of direction in his thinking. He alternates between leaning forward towards his listener, and sitting far back with his legs crossed when speaking reflectively.