The Cover Story -- Pulps Should Shock and Grab You! 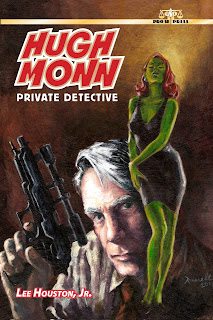 I can't be the only one who loves the old lurid covers. Nazis dipping beauties in gold, aliens freezing sexy girls to cart off to their planet, the cowboy brandishing his six shooter to protect the ranch-girl whose clothes have been all but ripped off by the bad guys. The old men's magazine covers promised something that I think Beau Smith gets very well -- testosterone. It was the old notion of protecting your women-folk, so to speak. Being the hero not just to be the hero, but being the hero to get the girl. (Or for the heroic jungle girl to get her guy. I know it worked both ways, so don't judge me too harshly as a male cretin.) 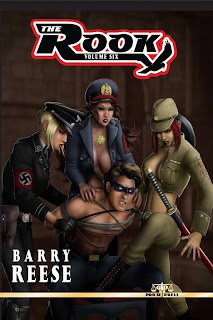 Maybe that's an outdated notion in our post ERA world.  Maybe not.

Regardless, I think that's actually something that is missing in a lot of the new pulp. The first ones to get it really right on a cover in a while (for my preferences anyway) is the Hugh Monn cover with the sexy green alien or the Rook covers (both available from Pro Se Productions -- see link on the side of the page). (I also think the cover to The Ruby Files that Bobby Nash and I created for Airship 27 -- the series, not the art -- does a pretty darn fine job of capturing that spirit as well.) That's what I was trying to come up with for the Lance Star story when I created Monique San Diablo and gave Bobby permission to use her in his mythos as he saw fit, the femme fatale. Or for Rick Ruby when I recommended to Bobby that he has not one, but three love interests, and all three are simultaeously romantically linked to him. (Then of course there are the femme fatales as well.) I guess I'm just one of those guys who feels that pulp works better when it's more than just a two-fisted man beating bad guys. There should be some sexy dame in there somewhere to either heat up or gum up the works. It's the same ol' song of sex and violence. Or when there is not a gorgeous femme fatale or damsel in distress around, monsters and violence. It's a time-tested melody. And it still sounds great. A few examples of some of my favorite covers to give you and idea of what I'm referring to: 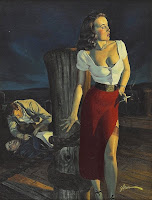 Or maybe I'm just a lurid old perv who cut his eye teeth on the old pulp covers a bit too much.

Before my MeMe rises from the grave to come "box my ears," I should add that by "lurid" I don't mean X-rated (or even R-rated), just that the hint of the violence was there, and it was implied to be very graphic, and was often perpetrated against a damsel in distress (a notion that Christa Faust is tipping on it's ear with  her new Dyke Dick stuff, with a lesbian hero saving the damsel in distress), and that sex (or at least sexuality) was used to help "sell" the cover and hence the book.