Like the hard-boiled hero, the femme fatale dates to classic myth. An example is Circe, who turned Odysseus' men into swine in Book X of The Odyssey and the Sirens, whose beauty and alluring song attracted his sailors in Book XII. … In the Middle Ages, Christianity refashioned this archetype as a devil, called the succubus. -- Characteristics of Hard-Boiled Fiction: The Femme Fatale (http://www.detnovel.com/FemmeFatale.html) 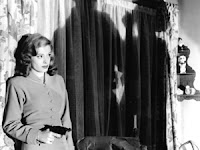 If you read my writing at all, you know I’m obsessed with writing femme fatales into my stories. In defense, giving the hero an equal and opposite makes for strong storytelling, but surely I could just give him a straight up villain for that role, right? Yes and no.
While a villain needs to be a fully realized character just as much as the hero, the femme fatales (at least to me) are something different, something special, the proverbial monkey wrench (though drenched in curves and slinky sex appeal) thrown into the machine. It’s her role to play Jiminy Cricket in a way, but more for the dark side, but not completely dark, but dark enough to fight dirty and to throw society’s conventions to the wind. She’s the little voice trying to seduce the hero to true independence from being pure good. She’s the test, at least in my mind, that reminds the hero that he (or she) has feet of clay and to never take that for granted.
A Few of My Favorite Femmes 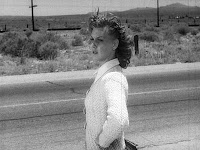 Femme fatales abound in classic films, of course, and many of my favorite actresses played them at one point or another in their careers, such as Marlene Dietrich, Rita Hayworth, Veronica Lake, Lizabeth Scott, Lauren Bacall, Gene Tierney, and Ann Savage, and some, such as Barbara Stanwyck all but made playing them their bread and butter roles.
But many of my favorites exist outside of classic noir films. In comics, particularly, Catwoman has to be the ultimate femme fatale, the temptation for Batman to dirty his cowl and cape by letting her go and

subsequently trying to tame her time and time again. In many ways, Poison Ivy serves that role to, but with a darker shade of fatale than Selina. Many of today’s comic book heroes got their start that way, from Scarlet Witch to Black Widow.
In Christa Faust’s Money Shot, Angel Dare is in effect both the hero and the femme fatale as the same time.  Even classic fantasy has its share, including the women who oppose and test and support Thomas Covenant in his adventures written by Stephen Donaldson. 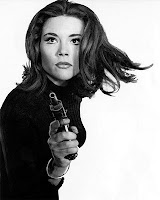 While she was most certainly on the side of right and good, even Emma Peel was clearly built (pun intended) on the model of the classic femme fatale, as if dressing up the heroine from the bad girl’s closet would engender the show to a greater demographic—which it did. Even Doctor Who got into the act with the addition of River Song, who is clearly the Doctor’s equal, and clearly less concerned about society’s moral impositions than the stodgy Doc. If anything, she’s a modern creation, the femme fatale with the heart of gold (somewhere underneath all the shooting and jail-breaking.

And modern films and TV are full of them too, including the Indiana Jones series, Decker’s obsession with Rachael in Blade Runner, Angel’s Drusilla, Darla, and later Illyria, and one of my favorites, Captain Mal’s “wife” of multiple names played by gorgeous Christina Hendrix.
What’s Fates Got To Do With It? 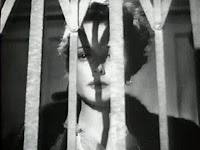 No. That’s not a typo. It’s not fate, like destiny, but fates, like the three Greek mythic women. Just look at Hammetts’s The Maltese Falcon:


“There Sam Spade is attracted to three women, a motif that echoes the ancient Greek Fates, who tell men the future. He is involved in an adulterous affair with his partner's wife, Iva Archer. His secretary, Effie Perrine, is a tom-boyish, competent girl-next-door who would make the perfect spouse. Brigid O'Shaughnessy, the femme fatale, seems to promise sensuality and wealth, but Spade sees through her – and uses her when she thinks she is using him. The novel's end leaves Spade alienated from Effie, who is, ironically, mad that he rejected the "romance" of Brigid, while Iva knocks at the door. It is a grim morality play about making your bed and lying in it.” (http://www.detnovel.com/FemmeFatale.html)

I had forgotten about this at the time, but realize now it’s the same thing Bobby Nash and I did when we put together the story bible for The Ruby Files for publisher Airship 27. Our own 1930’s private gumshoe has his own trio of beauties to contend with—his good girl secretary who wants to save his soul, his bad girl interracial lover, and the socialite who wants to tie him down to marriage—not to mention the femmes he meets from story to story. I’m sure one smarter than I am could make an id, ego, and superego reference to those three female archetypes as well.
“Of the three types of noir women, the femme fatale represents the most direct attack on traditional womanhood and the nuclear family. She refuses to play the role of devoted wife and loving mother that mainstream society prescribes for women. She finds marriage to be confining, loveless, sexless, and dull, and she uses all of her cunning and sexual attractiveness to gain her independence. … She remains fiercely independent even when faced with her own destruction. And in spite of her inevitable death, she leaves behind the image of a strong, exciting, and unrepentant woman who defies the control of men and rejects the institution of the family.” (www.lib.berkeley.edu/MRC/noir/np05ff.html)
“Critics tend to classify the women of film noir into two categories identified by Janey Place: the "rejuvenating redeemer" or "good" woman and the "spider woman" or femme fatale. But noir films also feature a third type of female character, the "marrying type" — a woman who poses a threat to the hero by pressuring him to marry her and "settle down" into his traditional role as breadwinner, husband, and father.” (www.lib.berkeley.edu/MRC/noir/np05ff.html­) 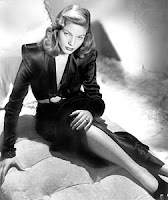 I really like that term “spider woman” and not because it makes me think of a certain friendly neighborhood wall-crawler. To me it really defines the type of woman I’m addressing here—she spins a web and you will get caught in it if you get to close. And chances are, she will eat you up, whether literally or symbolically, before the tale has come to an end.

Or as Marlene Dietrich sang in The Blue Angel in the song "Fallling in Love Again":


"Men cluster to me like moths around a flame
And if their wings burn, I know I'm not to blame" 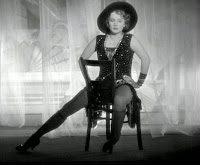 She does her thing because it’s her thing to do. No one can tell her differently and no man can tame her.
In the majority of noir films, however, the femme fatale remains committed to her independence, seldom allowing herself to be converted by the hero or captured by the police. She refuses to be defined by the male hero or submit her sexuality to the male-dominated institution of the family; instead, she defines herself and resists all efforts by the hero to "put her in her place." (www.lib.berkeley.edu/MRC/noir/np05ff.html)
And just now, as I’m typing this post, it hits me that I’ve subconsciously done the same thing in my story “City of Relics” for the Blackthorn: Thunder on Mars sci-fi anthology for White Rocket Books. The bad girl, the one who falls in love and could settle down (if the difference in species would allow for it), and the companion good girl, all together again in a pulp space adventure. The fates reunited on Mars for another book tour, so to speak.
So you see how these archetypes just work their way into you as a writer and become sort of second nature. Good stories are good stories, and so many of them have their basis way back in the myths and legends of the ancient world, even for something as future-seeking as Martian sci-fi or as tied to the early 20th Century American life as gritty pulp noir.
All well and good, of course, but the one who interests me is the bad girl with the heart of gold. She may ultimately fight on the side of right and good, but doesn’t mind getting her hands dirty or playing a game of “seduce the hero” while fighting the good fight.
Thank You, Barbara Stanwyck! 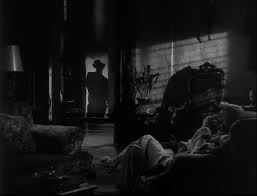 But really, you may say, all this is just a way to cover up the fact that you want to write sexy, violent women without people thinking you’re some kind of delinquent pervert.
Well, one thing I’ve learned is that people will think what they damn well please, and I try my best not to care what they think.
When I was writing the Gene Simmons Dominatrix comic book for IDW Publishing (of which I was thrilled to find Broken Frontiers called in a review “the pulpiest pulp on the stands”) I wrote a few pages of dialog between Dominique and her handler/client Doug that I think sums up my fascination with the femme fatale role and why I write them so frequently into everything from sci-fi to super-heroes to fantasy to action stories.

While Dom is threatening to throw Doug out of her house painfully, he blurts out the simple words, “Barbara Stanwyck.”
Dom replies: “What?”
Doug: “Barbara Stanwyck. She got me into this.”
Dom: "The woman from The Big Valley got you interested in conspiracies?"
Doug: "Doesn’t anyone under forty watch classic films anymore? Lady of Burlesque? Martha Ivers? Double Indemnity? Ringing any bells here? I watched her movies when I was a kid. I guess I sort of fell in love with strong women because of that."
Dom: "Fine, but don’t try to turn this into some kind of bad movie moment."
I was trying to explain Doug’s nature to readers at the time, but the more I go back and read the Dominatrix trade paperback, I find that I was inadvertently writing myself into the story at that point. It was Barbara Stanwyck who defined the role of the femme fatale for me, and I’ve been writing her into so much of what I create without even realizing it.
Even in her more dramatic (Meet John Doe) and comedic (The Lady Eve) roles, her characters were tough as nails and played by their own rules.
My Own Twist
I’ll admit it. I hated the movie Pretty Woman. I just can’t buy into the hooker with a heart of gold theme. Maybe it’s my fascination with noir. Everything should be dirty, tainted of original (and some new and unique) sin.

In spite of that, I do however love to write the femme fatale with the heart of gold—or at least with a heart of something slightly less valuable than gold. For me, the pinnacle of my fatale creations is Monique San Diablo (also called the “Saint Devil”), whom I created for my story “A Dance with the Devil” in Lance Star: Sky Ranger Volume 3. She plays both sides of the fence, freely admits to being a thief when it suits her, and a British agent when her special skills are needed On top of that, she’s more than willing to sully poor Lance’s reputation with his good girl Betty—if she can convince him to take her for a ride. She’ll do what it takes, but she’ll also do what she wants, all the while saving the day—when she feels like it.

And there you have it.


And in case this post has gotten you interested, here’s a list of “The Greatest Femme Fatales in Noir Film”: http://www.filmsite.org/femmesfatales.html
Posted by seanhtaylor at 12/05/2011 11:00:00 PM