Genre-Bending: How Pure Should Pulp Fiction Be? 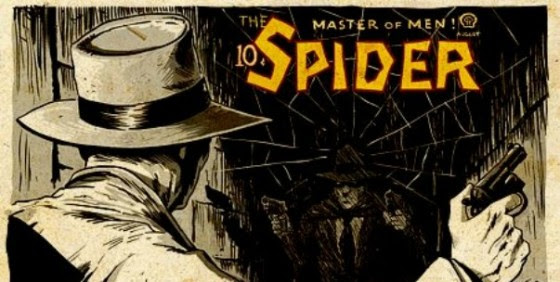 When you think of pulp fiction, what springs to mind? The hard-boiled P.I.? The lost Earthman winning and wooing on Mars? The jungle lord? The aviator adventurer? The masked vigilante precursor to the comic book super hero? Weird horror tales with skeletons and damsels in distress? (For the sake of argument, let's all assume you didn't immediately go to the movie with John Travolta and Samuel Jackson, even as good as it is.)

Pulp has covered many genres, and was originally so named because of the cheap paper on which it was published. Pretty much everybody who loves the style knows that.

But, over time, some genres tended to become more synonymous with the definition of pulp than others.

And some would argue that pulp itself is a genre. (For the sake of this article, we're going to treat pulp as a style of telling a story and not a genre unto itself, since so many genres were represented within its ranks.)

To explore this idea further, we went straight to several of new pulp's top creators. 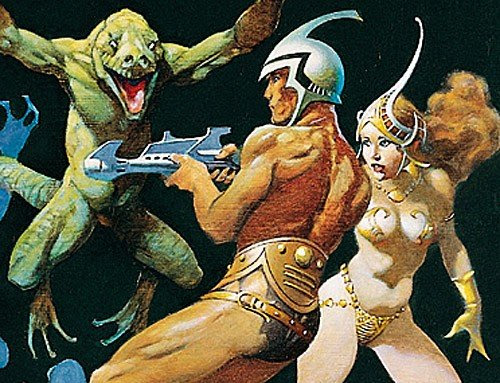 Ron Fortier: Series hero pulps, regardless of setting.  Doesn't matter if the hero is a masked crimefighter ala the Shadow or Scientist space man like Captain Future.  The settings were unimportant to the hero element that one could follow month after month.

Bill Craig: In my opinion, mystery, detective adventure and masked vigilante can all work well in the pulp genre.  Doc Savage often combined mystery with high adventure, just as the Shadow novels while mystery often had elements of mystery even as the Shadow himself was a "masked" vigilante.

Don Thomas: Personally I have always thought that the basic detective story is the quintessential best choice for type of story that can resonate with the reader.  As it slowly pulls them in word by word and page by page to the point where they can't wait to find out what happens next.  The further you delve into a detective story, the more complete the overall picture or story becomes gradually over time.  And perhaps one of the best ways to weave a self-contained story in each and every genre that you listed Sean.

Not just the classic example of the Sam Spade film noir detective story, but is not Alan Moore's Watchmen story a perfect example of an immense detective story featuring masked vigilantes?  And for that matter I can cite two great science fiction stories that could also be said to be detective stories.  One being Issac Asimov's Second Foundation novel where questions about The Mule and the Second Foundation lead the characters down the road of trying to figure out whodunit.  And in my opinion the greatest Legion of Super Heroes story that has ever been written, the Great Darkness Saga.

And the same can be said with the fantasy and horror genres.  My own Murder in the Ghetto of Trentonium being a fair example of such in a purely fantasy setting, and the Mickey Rourke and Robert Deniro playing the enigmatic Louis Cyphre in the movie Angel Heart being a great example of a detective story that is set very firmly in the horror genre.

Lee Houston Jr.: I think any genre is doable in pulp. Look at all that has been and is currently represented within the field. The only limitation in literature is the writer's imagination. Without it, the Shadow would not know what evil lurks in the hearts of men nor would John Carter have ever set foot on Mars.

Bobby Nash: I think any genre can work. Why not?

Erwin K. Roberts: Any genre can be written in the pulp manner. Take Carl Barks, and now Don Rosa's Disney Duck stories. I'd love a chance to write a slam-bang prose version of a Scrooge McDuck Fiscal Safari™.

Ian Watson: Some genres naturally led themselves to a pulp approach better than others. Generally those which involve concealment and revelation or action work best. Romance, depending often on the detailed dissection of circumstance and emotion, is not always served by pulp's speed and brevity of introspection. Mystery and horror, using deception and shock discovery, are ideal. Physical conflict is difficult to write well but pulp offers a useful technique to accomplish action-packed adventure sequences.

Do you prefer to keep a genre pure when you write? Why or why not?

Ron Fortier: Dangerous question I'll skip this one, as some of us still see pulp itself as a genre.

Bill Craig: No genre is really pure because they all have elements of each other.  Lester Dent wrote about radar and many devices in the 30's and 40's that the public was seeing turn into reality in the 60's and 70's, so Doc Savage stories combined mystery, adventure, and science fiction all at once, which backs up my conclusion on that one.

Don Thomas: Generally when I am writing a story in a particular type of genre, I try to keep the focus on writing that particular type of story.  Not to say that their can't be elements of other genres within the entirety of that story, but they are just elements.  The whole of the story is that main genre, and the goal is to weave a good tale in that particular genre.

Lee Houston Jr.: Personally, I feel that anything is possible. But I would not do it just because I could. It would be a question of what the story/series calls for.

Bobby Nash: Define pure. I do enjoying mixing my genres.

Erwin K. Roberts: Define pure genre, please. I can't. For instance, does western have to be post-Civil War? Then what about the Leatherstocking tales? Or Zorro? Or tales of the Mountain Men?

Ian Watson: I struggle to answer this one because I don't really sit down and think "I'll write some pulp today". It just so happens that my natural writing style meets some of the definitions currently out there for pulp fiction. The only exceptions are why I'm trying to emulate or echo some other writer's style.

What about blending genres in pulp stories? Is it a fun way to spice up a tale or is it committing sacrilege in the pulp religion? 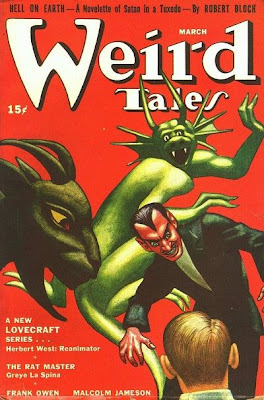 Ron Fortier: Sacrilegious? You're kidding right? The most popular pulps were the ones that blended: Ranch Romance, Pirate Mystery Tales, Weird Western Adventures. The whole concept of blending came from the pulps—it was their hallmark and remains true to this day.

Bill Craig: I love mixing it up.  In my latest Hardluck Hannigan story, Peril in the North which will be out after the first of the year, Hannigan gets another hand from The Reaper(masked Vigilante) who also appeared in River of the Sun.  He is headed for a hidden arctic base which was originally built by aliens and houses flying saucers that the Nazis are starting to use(science fiction) and it is all a big adventure.  It combines multiple elements of several genres to make a fun and exciting tale for my readers.

Don Thomas: Brothers Jade is a good example of this, as although as a whole it is definitely an example of Fantasy writing, there are prime and very tangible parts and scenes of that tale that can be just as frightening to the reader as any good ghost story.  For example the inner conflict of Deth Ethereld that eventually compels him to become a murderer, has similarities to the fall into psychotic madness that Jack Nicholson's character Jack Torrance in the Shining experiences.

To me the genre of a story is the destination to keep in mind during the long journey of weaving a particular type of story.  But the routes, execution, and elements that a storyteller can take and utilize along the way for that story can and should have infinite possibilities.

Lee Houston Jr.: If you have the right combination and it works to the readers' satisfaction, where's the "sacrilege"? My own Hugh Monn is a private detective with all the classic trappings of the detective/mystery genre, yet he works in the far future on another planet in a different part of the universe, thus blending in some science fiction elements. While I try not let one side of the equation overshadow the other, the two genres together make for a much more interesting story/series overall.

Bobby Nash: There's a pure pulp religion? Personally, I like mixing genres, but only as the story requires. Story and character come first. If the story warrants mixing horror and a mystery, for example, then I'm all for it.

Erwin K. Roberts: The "last" pulp magazine was a genre bender: Ranch Romances. Anything goes. So long as you have an exciting and reasonably logical story.

About thirty years ago I submitted a story idea for Charlton Comics' "Bullseye" program. The idea was approved, but I couldn't find a reliable artist to draw the strip. Recently I excavated a copy of the treatment from near the bottom of the Culture Vault. I'm changing the circa 1980 adventure to star my second generation pulp-hero, The Voice, and an elderly Ravenwood. The original would have featured the Steve Ditko version of the Question & Dr. M.T. Graves. (The story will directly follow this tale: http://www.planetarystories.com/voice.htm )

Ian Watson: As a reader I don't mind how "pure" any style is. I simply expect to be entertained and perhaps enlightened. To do that the writing has to be engaging, the plot clear and well told, and the whole reasonably free from errors and bad grammar that might damage my suspension of disbelief. Other than that, I don't mind if the authorial voice is Spillane or Lovecraft, LeFanu or Banks, Pratchett or Gaiman, Clive Barker or M.R. James. I'm interested in how the music affects me, not the technique or genre used to play it. In fact I generally prefer a good original to a bad derivative.

Bill Craig is the author of The Jack Riley Adventures: Valley of Death, Mayan Gold, Dead Run, Pirate's Blood, The Child Stealers, and The Mummy's Tomb; as well as numerous other stories.

Erwin K. Roberts is the author of PLUTONIUM NIGHTMARE and a contributor to JIM ANTHONY - SUPER DETECTIVE.

Ron Fortier has been a professional writer for over thirty-five years and has worked on comic book projects such as The Hulk, Popeye, Rambo and Peter Pan. His two most popular comic series being The Green Hornet and The Terminator (with Alex Ross). He is one-half of the massive creative force behind Airship 27 Productions.

From his secret lair in the wilds of Bethlehem, Georgia, Bobby Nash writes novels, comic books, short prose, novellas, graphic novels, screenplays, and even a little pulp fiction just for good measure. And sometimes he thinks he can draw.

Lee Houston Jr. is a freelance writer and editor. He is the author of the Hugh Monn and is writing for the forthcoming THE NEW ADVENTURES OF THE EAGLE VOLUME ONE from Pulp Obscura.