I've got a special treat for you this month. I'm going to devote Tuesdays, Thursdays, and Sundays to writers from eSpecs Books. They're a great bunch of folks whom you need to get to know.

Next up, Christopher J. Burke! 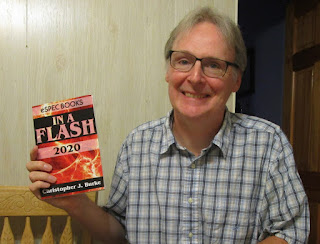 I have three short shorts appearing in the anthology Devilish & Divine from eSpec Books. The first involves a meeting between the last demon of its domain as it traverses a bridge across the planes to where the last angel remains vigilant after a lengthy war across the astral planes. The second involves a young man who can hear thoughts of every dog on the street and in the park on a day when he crosses paths with a hell hound. The last tale answers the question: what do you do if you're an ancient destroyer of worlds and you accidentally get summoned by a four-year-old to a tea party?

Ever since I learned to talk (or so I've been told), I've been telling stories. My mother may have doubted the veracity of some of them but she acknowledged their creativity. This gift of gab likely came from my father, who could spin a tall tale or two himself. Warning: take his history lessons with many grains of salt. Also, no small part of the credit should be reserved for my brother Stephen, who is 13 years my senior. While he was away at college, I may have gone through some of his stuff at home including a number of notebooks filled with his musings. I started putting my words on paper to be like him.

I started writing enough that when I was ten, Santa brought me a toy typewriter. It was plastic and only typed capital letters, but it was mine and it got a workout with any kind of paper I could scrounge up. Oddly, my friends would rather run around outside or play board games than sit and write stories. Weird.

Many things inspire me. Things I've heard or misheard. Plays on words. What if and why not? Sometimes, it's just two ideas that could fit together, which was how the first story I ever sold started. Someone might ask, "Did you ever wonder ...?" Maybe not, but I'm wondering now.

One of the first stories I remember putting down on paper as a young boy chronicled a dream that I'd had the night before because I didn't want to forget. Dreams still speak to me, and sometimes I listen to them.

I find myself returning to both magic and time travel, because it's fun to create rules that open worlds of possibilities. There are stories with each theme in my flash fiction collection In A Flash 2020 (eSpec Books). I like supers, too, because they're larger than life and yet down to earth. And I write about Family because that's just important to me.

It's interesting to see how a character's personality and motivations change when you mention that they have a sister or a son. I created a word map of my hellhound story and discovered that the word "Dad" is used most often though the father doesn't appear in the story, except in the main character's heart and mind. The son's personality changed immensely from the first draft.

My dream would be to create something new that I could keep coming back to and discover something fresh over the horizon. I'd populate it with people that I liked and that I liked to hate. And then tell a lot of stories about them. I don't know where this place is yet, but as soon as I've found it, I'll paint you a picture or draw you a map, with words, of course. 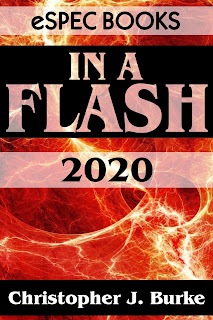 I enjoy reading authors who are more conversational in their style. If I had to pull two out of thin air, I'd say Mark Twain and Douglas Adams. Their use of humor and the fun they had with language are things I strive for.

After my first sale in the late 80s to Autoduel Quarterly, an in-house publication from Steve Jackson Games, I had difficulty making a second sale. However, I was able to get a license to create my own fiction fanzine, Driving Tigers Magazine. The problem arose that I was now editing myself, among others. Not that I saw it as a problem thirty years ago. Looking back now, I can see how those stories suffered. If there was ever a chance to reprint those pieces, I'd apply lessons learned in the intervening years to that text until it didn't wince when I reread it.

My high school Creative Writing teacher told me: "You have a sense of story here. We need to bring it out." Being a math teacher, I'm a science-type by nature. But it's the words that make the story, and the right choice of words in the right order is an art. On my most productive days, I don't feel like I've created fire. I feel like I'm making words sing.

The most difficult part is getting through a first draft without wanting to kill it with fire, or nuke it from orbit just to be sure. Second to that is deleting all that "greatest writing ever written" that appears in the first draft in order to get a coherent second draft.

If there was one thing that pushed me over the top to sell my first story, it was the fact that my friend Rob was published in the same magazine first. After that, it became a mission that if he could do it, so could I. Okay, maybe I was being competitive, but it worked.

Aside from this, my friends are great for bouncing ideas around and for encouragement to write things in the first place. They're also good for telling me when something isn't working right in a story, or if I describe something and "it doesn't work like that."

Right now, I'm happy to see a book with my name on it, on its own page at Good Reads or Amazon, with a bunch of ratings and reviews, and people having wonderful little conversations about this thing I created. If a story or two from In A Flash 2020 made someone a little happier for a little while, that's a success.

Aside from Devilish & Divine, I have my semi-regular webcomic (x, why?), which since 2007 has celebrated math, teaching, and anything geeky, while reveling in bad puns. It updates several times a week on my blog: http://mrburkemath.blogspot.com.