A TRAVELING SHOW OF CREATURES WHERE THE OWNER IS THE BIGGEST MYSTERY! ‘MATAGORDIA’S MYTHICAL MENAGERIE’ NOW AVAILABLE!

Come one, come all! Feast your eyes, ears, and more on the most wondrous creatures pulled from myth and legend ever gathered in one place. And in this traveling, almost unexplainable spectacle, the most amazing being is the owner, Matagordia, him…or herself! 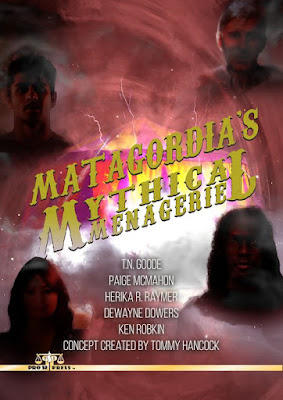 MATAGORDIA’S MYTHICAL MENAGERIE is a wondrous mix of magic, mystery, and madness. Beasts, beings, and monsters thought to be fantasy…or fears alone are the featured attraction of this extravaganza. The truth is that humans and the animals we know to exist are not all that exist, and those things, those living things that belong to legend and nightmare, to dream and story…they need a place to be as well. A way to live. And someone to take care of them.

Be it a circus tent in the middle of a Midwestern field in the 19th Century or a small auditorium that somehow suddenly appears in Chicago in the 1930s, Matagordia’s Mythical Menagerie is a place where not only can regular folks see creatures they thought to be made up…but those very beasts aren’t on display as much as they live in a world all their own, one that is more than tent flaps or doors. Where outsiders see a warehouse actually may exist entire landscapes…and then there’s Matagordia, as much mystery and possible myth as the creatures on impossible display.

Featuring a mysterious cover and print formatting and logo design by Antonino lo Iacono, MATAGORDIA’S MYTHICAL MENAGERIE is available for 9.99 via Amazon.

Formatted by lo Iaocono and Marzia Marina, this first volume of adventures is available as an ebook for only 99 cents for a limited time from Amazon. Kindle Unlimited members can read for free!