THE RETURN OF DOC ATLAS

Airship 27 Production is thrilled to present the first in a series of books starring Doc Atlas. Created by Michael A. Black and Ray Lovato as their homage to the classic 30s and 40s characters such as Doc Savage, Jim Anthony etc. In no time at all Doc and his team became huge fan favorites appearing via multiple publishers such as Eclipse Publishing and Crossroads Press. Now at long last, the dynamic trio of Doc, Thomas “Mad Dog” Deagan and Edward “Ace” Assante have found a new home with Airship 27 Production. 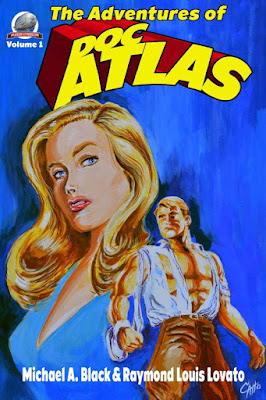 In this premier volume they deal with three action-packed cases. From a deadly mystery haunting an ancient Mayan pyramid in Mexico, to Roswell, New Mexico to investigate the supposed crash of a flying saucer. And finally down to the Amazon jungle on the trail of Nazi war criminals in control of a mysterious death-dealing monster. Here is action and adventure in the mold of the classic pulps only with a daring new perspective by two amazing storytellers. This is what New Pulp was made for.

“We are super thrilled to be releasing this first book,” says Airship 27 Production’s Managing Editor, Ron Fortier. “It was scheduled for 2018, but the best-laid plans don’t always materialize as we hope. Covid and other variables pushed us back a few yards but the goal post at long last is scored. And the win is all the sweeter.”

Joining the team of Black and Lovato on Airship 27’s new Doc Atlas series is Pulp Factory Award-winning artist Ed Catto. Catto will be providing all the covers and interior illustrations for this dynamic series. He couldn’t be happier. “In all,” Fortier continues, “we’ve put a package together we feel all New Pulp fans are going to relish. Now on to volume two!”