Digging Up the Deadly With Bobby Nash

Tell us a little about yourself and where readers can find out more about you and your work?

I’m a writer. I sit and stare at a computer screen for hours on end trying to come up with tales that will hopefully entertain readers.
Here’s my official bio and contact info:
From his secret lair in the wilds of Bethlehem, Georgia, Bobby Nash writes. A multitasker, Bobby is certain that he doesn’t suffer from ADD, but instead he... ooh, shiny.
When he finally manages to put fingers to the keyboard, Bobby writes novels (Evil Ways; Fantastix; Deadly Games!), comic books (Fuzzy Bunnies From Hell; Demonslayer; Domino Lady vs. The Mummy; Lance Star: Sky Ranger “One Shot”), short prose (A Fistful of Legends; Full Throttle Space Tales Vol. 2: Space Sirens; Green Hornet Case Files; Tales of The Rook; Zombies vs. Robots), novellas (Lance Star: Sky Ranger; Ravenwood: Stepson of Mystery; Nightbeat; Blackthorn: Thunder on Mars), graphic novels (Yin Yang; I Am Googol: The Great Invasion; Bloody Olde Englund), and even a little pulp fiction (Domino Lady; Secret Agent X; The Avenger; The Spider) just for good measure.  And despite what his brother says, Bobby swears he is not addicted to buying DVD box sets and can quit anytime he wants to. Really.
When not writing fiction, Bobby attends conventions and writers conferences, promotes his books, teaches writing courses and panels, and is a part-time extra in movies and television. Bobby is also the co-host of the weekly Earth Station One podcast (www.esopodcast.com) and writes for New Pulp (www.newpulpfiction.com) and All Pulp (http://allpulp.blogspot.com) news sites.
For more information on Bobby Nash please visit him at www.bobbynash.com, www.facebook.com/bobbyenash, www.twitter.com/bobbynash, www.lance-star.com, and http://BEN-Books.blogspot.com among other places across the web.

Tell us a bit about your new novel Deadly Games.

They Played The Most Dangerous Game Of All!
And Death Was Only The Beginning...
Six years ago, Police Detective John Bartlett and journalist Benjamin West were instrumental in the capture of notorious master criminal Darrin Morehouse. Their story played out in the media, rocketing both Bartlett and West into local celebrity status.
Today, Morehouse, still a master game player and manipulator, commits suicide while in prison. His death initiates one final game of survival for the people Morehouse felt wronged him the most. At that top of the list are Bartlett and West, who must set aside their differences to save the lives of Morehouse's other victims and solve one last game before a dead man’s hired killers catch them and his other enemies.
Deadly Games! is a fast-paced action/thriller featuring action, suspense, murder, and the occasional gunfire from Author Bobby Nash, the writer of Evil Ways, Domino Lady, Lance Star: Sky Ranger, and more.


You also seem to keep popping back around to visit the Golden Age classic, the Domino Lady. How did that come about and what's new in that neighborhood?

The Domino Lady and I have an interesting relationship. I was unfamiliar with the character until I was invited to write a story for an anthology. I read the original stories and really fell in love with the character. Through a series of events that I won’t bore your readers with, the anthology went through some changes and eventually found a home at Moonstone books where it was released as Domino Lady: Sex As A Weapon.
I then had the Domino Lady’s alter ego, Ellen Patrick make a cameo appearance in my story for Lance Star: Sky Ranger Vol. 2. After that I didn’t know if I would ever write the character again, although I hoped to do so.
In 2011 I got that chance when I was invited to co-write a one shot comic book story with the fantastic Nancy Holder for Moonstone’s Return of the Monsters event. We had so much fun that it looks like we’re going to collaborate again on a future Domino Lady comic book story when she teams up with a certain British Detective.
Late in 2011 I was invited to write a Domino Lady novel for Moonstone’s upcoming line of pulp novels. I’m excited about this line and the books already solicited like Howard Hopkins’ Lone Ranger: Vendetta and CJ Henderson’s Kolchak: The Night Stalker And The Lost City and CJ’s The Spider novel as well. No in store date as yet. I start work on the novel in February.
I see you're involved in the new Pulp Obscura line. Are you at liberty to discuss those projects yet? Is so, spill already!

I am excited to be a part of the new Pulp Obscura line from Pro Se Press and Altus Press. As of this moment I am scheduled to work on four of the anthologies in 2012. However, only two have been announced so I can only share a little bit of information about those.
First up for me is The New Adventure of The Eagle. I just started working on this story today (1/14/12). I’m actually taking a short break from the story to do the interview. Originally, The Eagle appeared in five stories. He is a spy fighter often dubbed as “the master spy-fighter of them all.” I can’t spill too much about the story, but the title of my tale is “Lights! Camera! Sabotage!” Unless, of course, I change it before I’m finished, which I’ve been known to do.
The second is The Cases of Major Lacy. Major Lacy appeared in eleven stories, the last of which ended in a cliffhanger. Now, after all these decades, that cliffhanger will be resolved. I was tapped by Pulp Obscura editor, Tommy Hancock, to write the resolution to the cliffhanger and storyline. It’s a bit daunting, but I’m excited by the challenge. I’ll start work on that story in mid to late February.
What would be your dream project?
This is one of those answers that’s subject to change on a daily basis. I would love to write The Fantastic Four or Captain America. Plus, I think I have at least one story in me for Star Trek, or any number of media tie-ins of which I am a fan. I’ve made a couple of pitches for Stargate SG-1 and Stargate: Atlantis novels, but so far haven’t had any bites from the publisher that holds the license. Maybe one day.
If you have any former project to do over to make it better, which one would it be, and what would you do? 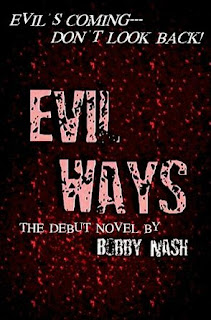 I don’t usually think along those lines. Once a project is done and gone I move on to the next one. That said, if I had only known then what I know now, I would have found a different publisher for Evil Ways. It was just a bad experience. That said, however, if Evil Ways had not come out when it did I might not be working on many of the projects I am today. Reading Evil Ways led Ron Fortier to think of me for Lance Star: Sky Ranger, which led to Domino Lady, etc, etc...
Any other upcoming projects you would like to plug?
But of course. You know me. I never pass up a chance to promote. Ha! Ha!
Coming in March is The Ruby Files Vol. 1 from Airship 27. Rick Ruby, p.i. is the first of several anthologies on the way co-created by the team of Bobby Nash and Sean Taylor. The second is called The Danger People from New Babel Books, but no release date on that one at this time. Plus, I am honored to have a story in IDW’s upcoming Zombies Vs. Robots prose project called “The Wall.”
Some other prose anthologies coming in 2012 featuring stories by me include Tales Of The Rook, Yours Truly, Johnny Dollar, Box 13, Nightbeat, The Avenger: Tales From Bleek Street, The Spider Vol. 2, Episodes From The Zero Hour Vol. 4: Weird Tales, Green Hornet: Still At Large, Lance Star: Sky Ranger Vol. 4, The Wraith, Secret Agent X Vol. 4, Aym Geronimo And The Post Modern Pioneers: Tall Tales, and more.
There’s also some movement on the novel front with the reissue of EVIL WAYS from New Babel Books. There’s also the aforementioned Domino Lady novel (title pending), Lance Star: Sky Ranger “Cold Snap!”, and Earthstrike Agenda. I’m also working on the novels Evil Intent, Blood Shot, and Deadly Games! 2 (title pending).
Upcoming comic books and graphic novels coming in 2012 include Lance Star: Sky Ranger “Space Ranger And Other Tales” with Jeff Austin and Rock Baker on art, the aforementioned Domino Lady comic with Nancy Holder, Bloody Olde Englund with Jason Flowers, Operation Silver Moon with Rick Johnson, and an as yet unannounced graphic novel I’m co-writing with Michael Gordon.
2012 is going to be a busy year.
I don’t have firm in store dates on some of these books yet, but I’ll share that news at www.bobbynash.com where you can learn more about my projects when I can share information.
Thanks for your time, Bobby!