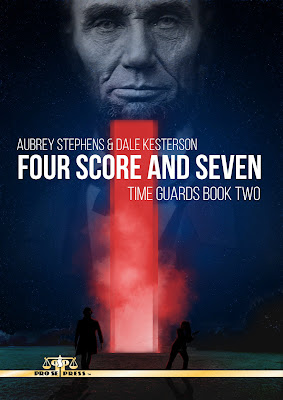 FROM THE FUTURE TO SAVE THE PAST…OR SHOULD THEY? -‘FOUR SCORE AND SEVEN: TIME GUARDS BOOK TWO’ NOW AVAILABLE

In THE DEVIL TO PAY, the first volume in the TIME GUARDS series, John Andrews and Cathy Howell found themselves somehow transported back to 1863 during a Civil War reenactment. Fighting for their lives in the Battle of Gettysburg, the Civil Engineering Professor and Emergency Room doctor use all their skills to survive one of the most horrific battles in history. But why they were snatched back in time, much less how, haunts the pair after Gettysburg in FOUR SCORE AND SEVEN: TIME GUARDS BOOK TWO, now available from Pro Se Productions in print and digital formats.

Going off the wild possibility that for some reason they are meant to correct an error in the timeline, they struggle between figuring out how to get back to the present day or planning new lives in a world both familiar and strange. Before any answers present themselves, they stumble on a plot to murder perhaps the most important man in the era they are trapped in- President Abraham Lincoln- a full two years before his assassination.

Now torn between foiling the plot or doing nothing, Cathy and John become fully aware that either choice could change history. And, regardless of what they do, they may either find their way home…or lose any chance of returning to their time ever.

With stunning cover work and formatting by Antonino lo Iacono and Marzia Marina, the book is available via Amazon for $9.99 at tinyurl.com/5dsfspx2.

Book Two in the TIME GUARDS series is also available on Kindle formatted by Iacono and Marina for $0.99 for a limited time at https://tinyurl.com/3a5bfd2v. Kindle Unlimited Members can read this thrilling adventure for free!

Book One of the series, DEVIL TO PAY, is also available in print and digital format on Amazon.