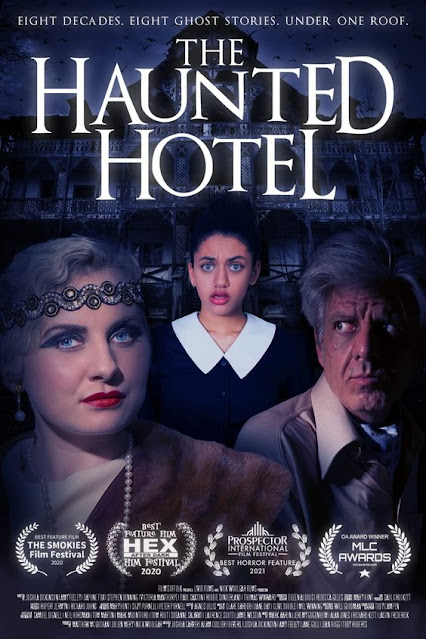 This is a pretty neat little indie horror anthology. I use the word "horror" lightly because it really doesn't resort to jumps scares or event super-dark atmosphere for its creep factor. It's really more of a sort of haunted history with a movie attached to it. Some of the segments (as in any anthology) are better than others, but none really fall flat (at least for me).
Two of the segments have specific writer-driven stories. The first features Charles Dickens as he is looking for ideas that will eventually become The Pickwick Papers. The other is a tale of a fictional contemporary horror writer who can't write because of the fears he suffers.
Other segments cover workers trying to scare customers as a ghost hotel, a paranormal investigator using a gizmo to find ghosts, criminals using the eventually abandoned hotel as a getaway spot, a married couple keeping an engagement beyond the grave, a room that won't cooperate with a freshly hired housekeeper, and a #metoo story in a vengeful room.
The sets are fantastic and the acting equally so in most segments, but let's look at what we're here to see -- what it says about writers and writing.
The opening short introduces us to a flustered Charles Dickens who is franticly trying to follow up his previous fan favorite with something new that has been promised to Mr. Sloane. He's a man living in fear and trying his best to control his space to make it safe. "I had to move the bed, you see," he says to no one, "so that I may sleep with my head pointing north. So, all will be well."
This piece of the anthology is a wonderful story of how we can attempt to establish a sort of pattern and norm for our work environments. And also how deviations, even just the shadow of a coat on the door, from those patterns and norms can feel bigger to us than they really are and pull us out of the stories we should be thinking of and putting down on paper.
However, it also has an almost madcap story about the unexpected nature of ideas and how we as writers must always be prepared to listen and look for them. While trying to work, he is interrupted by a hotel neighbor who is being pursued by a woman who feels her modesty has been wronged. And therein lies the true art in this segment, particularly when the pursued neighbor introduces himself.
After a few more segments, we are introduced to Peter Fearless, a best-selling writer who has fallen prey to his nightmares. Yes, the name is more than a little on the nose and lacking in subtlety but it works somehow.
After checking in (to a quiet room, he specifically requests), he attempts to resume his career after a breakdown. His new novel, Hunted or Haunted, a traditional ghost story (this time, no guts or gore), is pushing deadline and he's under a lot of pressure from his editor.
"Peter Fearless," he tells his editor over drinks, "I used to live up to my name. Now I'm afraid of everything."
His room is anything but the quiet he requested, however, and he starts to see images of and hear the barking from a large black dog in a portrait on the wall. This, of course, begs the question, is he haunted, still needing mental care, experiencing side effects from his medicine, or simply imagining it.
This is, of course, another take on the idea presented in the Dickens' segment -- being prepared for ideas when they come out of nowhere, as the dog becomes more than an interruption. It becomes a thought he can't escape, a very real thing that even works its way into his story and eventually takes it over.
I won't spoil the ending, but I will say that thanks to the dog, Peter Fearless is able to release another best-seller.
Posted by seanhtaylor at 9/01/2021 11:00:00 AM