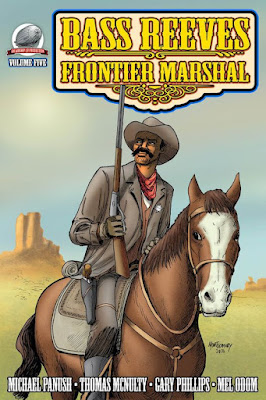 In this volume, the legendary black lawman faces another four challenges as he rides the badlands of Oklahoma before it became a state. From the curse of a Mexican witch to chasing a renegade Indian Chief, Reeves is relentless in his pursuit of lawbreakers and totally devoted to justice.

“What with two known Hollywood projects in the works, it seems Bass Reeves’ story is finally getting the recognition is deserves,” says Airship 27 Production Managing Editor Ron Fortier. “Both Paramount Plus and HBO have simultaneous western series now in development featuring Reeves,” Fortier reports. “Aside from the bogus fabrication of Reeves ever being an inspiration for the Lone Ranger radio show, the man’s factual career is more fantastic than any scriptwriter could have ever devised. We’re thrilled that our pulp scribes have jumped at the chance of writing new stories of this larger-than-life American hero.”

Artist Warren Montgomery provides the cover and Rob Davis interior illustrations. Writers Michael Panush, Thomas McNulty, Gary Phillips, and Mel Odom offer up tales of the frontier as seen through the eyes of the greatest lawman of them all. This is old fashion, western action as only these gritty pulp scribes can deliver. So saddle up and get ready to ride in adventure.