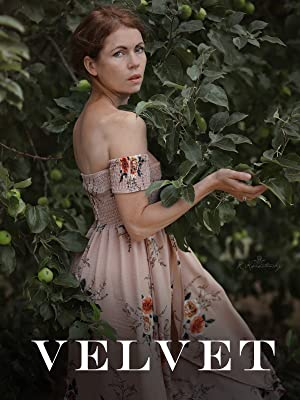 First. Don't get this one mixed up with the remarkable Spanish series about the department store. It's not that Velvet (as good as that is).
Okay? So now that we're on the same page.
Be warned. This movie has a lot of skin. I mean, a lot of skin. But that doesn't mean it's erotic. It's about as sexy as a discussion on existentialism. And that's fine. Because what this movie does (and does well, though some would call it boring -- it doesn't really have action) is ride around in the mind of a pondering young woman who decides to write a book and along the way discovers who she is in the process.
It's very thinky. Know that.
In spite of the nudity.
You'll be contemplating the beautiful scenery more than the naked woman on screen.
Serious. Trust me.
The film does a good but not perfect job of being a sort of stream-of-consciousness movie. It's dreamlike and it paints with a very slow-moving and overly lush palette of wide-shot scenery and close-up body shots. It even seems to fade from one thought to the next without clear scene breaks. Like I said, very dreamlike.
It's way too easy to just write it off as a student film with financing though. While it would never appeal to action and adventure fans, it does echo the thoughtfulness of some of the great French films of the sixties. Just... slower and with a lot more meandering.
Enough about that. We want to look at what it has to say about us, the writers who watch it. And the answer is, quite a lot more than I expected, even if those bits are blended into the rest of the surreal formlessness of the "plot."
Well, the biggest point it makes, even with so much silence and scenery, is that for the artist, it is through our work we discover who we are. We tend to know more about ourselves at the end of a work than at the beginning.
I think it's because of that subconscious self we can't help writing into a piece of fiction. I know that can come off as more "spiritual" than I mean it, but that's why I specified artist -- not just writers.
There are those of us who can separate our beings from the themes and works and just stream words along like we clocked in at the factory and are fastening a wheel to a car or putting pies into boxes (thanks, Lucy!)
Then there are the rest of us, for whom our work is more than just a job we can turn on and turn off. It's those I refer to when I say "artist." It's not high praise -- trust me -- it's a curse more often than not.
That said, we learn who we are inside as we write. The kind of characters we are drawn to say something about our hearts, our souls. The kind of situations we leave our characters in, resovled or unresolved, tell us how we see the world. It is this kind of thinking that Velvet succeeds best.
It's a point driven home by Sophie's sense of connection to the main character she is writing, a character who is beginning to understand her own attraction to her own sex.
She monologues over a scene of her tying on her laptop:

"I always see this girl. Perhaps I'm too hooked on her. But I like describing her. I feel and saturate her portrait with details. ... More emotions and feelings for her body and beauty. Even if she's a victim. Even if she will have to die at the end of the novel and whisper her last goodbye."

It's as if the character makes it all okay for Sophie to even contemplate those kinds of feelings in a real way, thanks to having her character think about them too.
It's also telling that she, as a writer and a woman opening up to her attractions, feels the need to make the character as real as possible, AND to have her die at the end of the thriller she is writing. (But that's an issue for counselors and psychologists to ponder better than me).
That's now all it has to say. One of the first tidbits that strikes home, at least for me, is this:

"Maybe I should look for a new character. Or just reread everything once again."

Sophie thinks about this as she is also having a tryst with what seems to be another random pick-up, demonstrating that not only is she growing dissatisfied with that kind of sex, but also how important her story is to her. Her words ring true for a lot of us I'd think, particularly when we're so deep into a work that we hit that "fix it at a core level or trash it and start over" point.
It's a painful place to be as an author. Commit to starting over. Or commit to the hard work of making it work as envisioned. The pain is because neither is the fun way to fix the story when it stops flowing naturally.
Another zinger of internal monologue comes as she voice-overs a murder scene she is envisioning. It's as much a piece of violence as it is a seduction, with no gore happening, just the insinuation of it under a gentle touch. It's actually a rather beautiful scene in spite of its eerie creepiness.

"I need some special details here. Maybe blood-stained bones. Or hands of the maniac. Without a finger? In dried blood. Some zest would help a lot. It would make the story stand out. I'd like to liven up the scene so that it would just take the breath away."

It's a topic we've covered on my writing blog quite often. Visceral writing, sensory details, and emotionally powerful images strengthen our work. Sure, often at the expense of our "ick" threshold or the comfort of our readers, but that's the whole point, isn't it? Make the words relate. Make the words reveal gut reactions to the scenes. Make the story feel alive. And I really, really like the word "zest" to describe it. Visceral descriptions are like spices. We need them to flavor, but too much ceases to be zest and ruins the taste. Zest is what we need to get that key flavor in a bite that makes us go back for another spoonful.
Again, this wild little flick may not be every viewer's cup of tea, but if you're open to slow, deliberate, existential films that understand how our creative work drives us, I recommend it.
Posted by seanhtaylor at 7/13/2022 11:00:00 AM