VALIDUS-V Arrives in Hardcover, Trade Paperback and on Kindle! 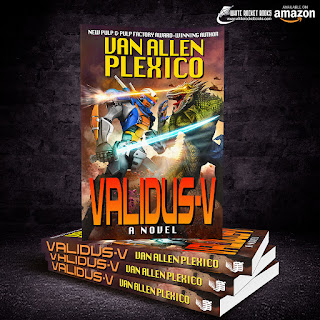 Giant Robots! Giant Monsters! And one kid caught in the middle! In the spirit of Marvel’s Godzilla and Shogun Warriors comics of the 1970s.

It’s 1978 and David is a high school student who stays with his aunt in Hawaii, eats mac and cheese, and talks Star Wars with anyone who will listen. But when his brother—the pilot of a gigantic, super-powerful robot—is injured, David must learn to operate the most advanced weapon on Earth, save his brother’s life, and battle three other robots, whose pilots are trying their hardest to kill him. And that’s before giant monsters rise up out of the Pacific to add to the carnage! Where did they come from—and will David survive long enough to find out?

Says creator Van Allen Plexico: “As a huge fan of Doug Moench and Herb Trimpe’s big monster and robot comics like Shogun Warriors and Godzilla back in the day, I have always wanted to write a story that involved those same sorts of characters and creatures, and evoked those same feelings. When the idea for VALIDUS-V came to me, I pretty much dropped everything and got to work. Four giant robots with different specialized weapons; four giant monsters of different shapes and sizes (but are they good or evil??); a group of skilled international pilots led by an enigmatic British professor; and an ancient alien conspiracy! What more could you want? I couldn’t be happier with how it all came out. And I think the spectacular cover art and design by Jeffrey Hayes of Plasmafire Graphics elevates the whole thing to another level!” 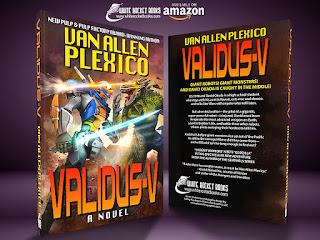 Now in its eighteenth year, White Rocket Books is a leader in the New Pulp movement, publishing exciting action and adventure novels and anthologies, in both traditional and electronic formats.   White Rocket books have hit the Amazon.com Top 5-by-Genre and reached #1 on the New Pulp Bestsellers List, and have garnered praise from everyone from Marvel Comics Vice-President Tom Brevoort and Avengers scribe David Michelinie to Hard Case Crime’s Charles Ardai and Kirkus Reviews.

Full details and links at www.whiterocketbooks.com