[Link] Margaret Atwood, The Art of Fiction No. 121

The manuscript of “Frogless,” a poem that appears in this issue, by Margaret Atwood. Ms. Atwood wrote the poem on an SAS Hotel’s bedside notepad while she was in Gothenburg, Sweden last September for the Nordic Book Fair. “I’ve written quite a lot under those circumstances. Perhaps it’s being in a hotel room or a plane with no ringing phone and no supervision. Also, there’s something about jet lag that breaks down the barriers.” 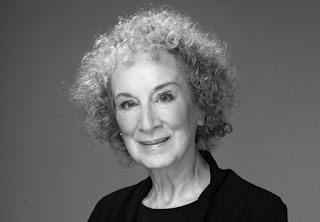 Margaret Atwood was born in Ottawa, Ontario in 1939. As a child, she lived in the wilderness of northern Quebec and also spent time in Ottawa, Sault Sainte Marie, and Toronto. She was eleven before she attended a full year of school. In high school Atwood began to write poetry inspired by Edgar Allen Poe, and at sixteen she committed herself to a writing career, publishing a collection of poems, Double Persephone, six years later.

Her second book of poetry, The Circle Game, earned her the Governor General’s Award—Canada’s highest literary honor—and from that time forward she has been a dominant figure in Canadian letters. In 1972 Atwood sparked a hot debate when she published a controversial critical study of Canadian literature, Survival: A Thematic Guide to Canadian Literature. In it she claimed that Canadian literature reflects the submissive as well as survivalist tendencies of the country, born from its being a subordinate ally to the United States, a former colony, and a country with vast stretches of untamed land. Following the publication of this volume, Atwood retreated from Toronto, where she had been working as an editor at the publishing house Anansi, to a farm in Alliston, Ontario, where she began to write full time.

Atwood has published nineteen collections of poetry—including The Circle Game (1964), The Journals of Susanna Moodie (1970), Power Politics (1971), You Are Happy (1974), True Stories (1981) and Interlunar (1984)—but she is best known for her novels, which include Surfacing (1972), Lady Oracle (1976), and Cat’s Eye (1988). Her most widely read novel is The Handmaid’s Tale (1986), a chilling account of a puritanical theocracy that won Atwood a second Governor General’s Award and was recently made into a motion picture. She is also the author of two children’s books, Up in the Tree (1978) and Anna’s Pet (1980) and two collections of short stories, Dancing Girls (1977) and Bluebeard’s Egg (1983). She has edited Oxford anthologies of Canadian verse and Canadian short stories and, with Shannon Ravenel, the 1989 volume of The Best American Short Stories.

The question of the status of women has frequently been an issue in Atwood’s work, and feminists have seized upon her writing as a product of the movement. Atwood has also made other political and philosophical issues themes in her work, such as Canada’s struggle to create an identity and, in recent years, her concern for human rights.

This interview was conducted in a house near Princeton University, where Atwood had gone to give some readings and lectures. In person, Atwood is much as one might expect from reading her work—incisive. For many hours over a period of two days, while teenage boys bounced basketballs and played music outside, people walked in and out, and football games played on the television in the next room, Atwood sat, attentive, answering each question without hesitation. She never strayed from her point, never seemed to tire, and remained, like a narrator from any one of her books, unflappable.

INTERVIEWER: Has the theme of survival always been intrinsic to your work?

MARGARET ATWOOD: I grew up in the north woods of Canada. You had to know certain things about survival. Wilderness survival courses weren’t very formalized when I was growing up, but I was taught certain things about what to do if I got lost in the woods. Things were immediate in that way and therefore quite simple. It was part of my life from the beginning.