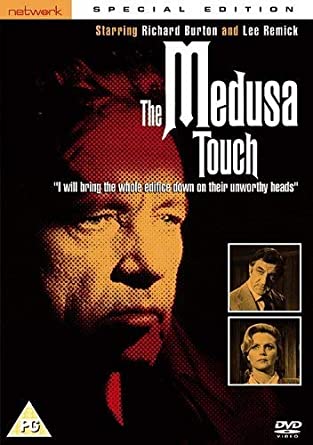 We all know that writers change the world, but not like the writer Morlar in this thriller played by Richard Burton. A writer with a talent for psychically causing accidents, Burton is a dangerous man that not even death can stop. Lee Remick plays his psychologist who gradually comes to believe the impossible.

The first thing I acknowledged while watching this movie is that as writers, we all suffer from the same problem Burton does -- we will disasters. Granted, we only make them happen on paper and digital screens, but we will tragedies into being regardless.

Without them, our fiction would suffer.

I've often said in panels at conventions that if my characters ever came to life the first thing they would do is shoot me in the back without a second thought. I mean, honestly, I make their lives hell. I have too. When they have a good relationship, it's my job to put it through the proverbial wringer for the sake of a compelling story. When life is going well for them, it's time for me to throw a dead body or a monster or a debilitating disease at them, again, all for the sake of an interesting read for the readers.

Without some kind of life or death (emotionally, psychologically, or physically) on the line, who would care to read the book? We read because we want to see people overcome obstacle, or at least try to and fail.

So it's my job as the storyteller to will disasters into being. My love for my characters, my literary children, be damned. The story is king. So, here comes the potential tragedies, kids.

The next tidbit I picked up from this gripping flick is one we've covered in other review as well, but it's reiterated here quite well.

You only really know writers by reading them.

While Detective Brunel is trying to find out more about Morlar's past, he meets with the author's publisher, a man named Moulton. During that exchange, Moulton drops a zinger that says this outright to the detective.

Moulton: He was a brilliant writer, and his last books were the best.

Brunel: What were they about?

Moulton: Evil and the power. He had the gift for tying one to the other, but nobody wanted to know. Copies always sold, but somehow they never got reviewed.

Brunel: Could he have made enemies with what he wrote?

Moulton: You'd better read him and see. Since no one paid very much attention, I doubt they inspired murder.

In other words, I couldn't know him as a human being well, only as a writer, at least truly know him. It's a sentiment echoed later in their conversation.

Moulton: It's funny, there was something about him, very private, very intense, a little menacing. It's not strange someone tried to kill him, but I couldn't tell you why.

Brunel: And his personal life?

Moulton: I'd be surprised if he had one, he was so self absorbed. In all the times we met, I can only remember one moment that didn't have to do with business.

I really that not all writers are as stand-offish the fictional Morlar, but the truth stands to a degree with all of us. You'll learn far more about it through our work rather than by observing us. Observation may show you habits and hobbies, but reading our stories will reveal the truly important stuff lying beneath the surface, our innermost thoughts and values and goals.

In another flashback, as Brunel continues to dig for answers, Moulton reveals another lesson for us from this film. It is this: Readers don't always know the difference between writers' views and their characters' views. Accept that and move on.

It's a hard lesson for us, because we populate our worlds with characters with a variety of actions and beliefs, and it hurts to think that some readers may see our inclusion of a morally gray character as meaning we are morally ambivalent or our revenge story as proof that we are inwardly violent as well.

I have a friend who was accused of being a Nazi because he included Nazis as the bad guys in his WWII-era pulp fiction. Like it or not, there's just no stopping it from happening. Once the story is out in the wild the meaning and interpretation are out of your hands as the writer. People will believe what they want to about your work. And that's okay.

During that flashback I mentioned, Moulton, as a publisher, tries to warn Morlar about that very situation.

Moulton: I've read your manuscript. It's very exciting. I love your satirical dissection of the Prime Minister. But there's this other bit that worries me. 'It's God who should...'

Morlar: ...stand at the bar of public opinion. That almighty enemy of evil should face the jury of his victims, the helpless, the hopeless deformed, the despairing.

Moulton: It's a little strong.

Morlar: I'm not responsible for what my characters say. Colby's despair entitles him to taunt that celestial non-entity.

Moulton: But your readers won't see it that way; they'll say it's you.

Morlar: I can live with that, I've known despair too.

I like Morlar's response here: "I can live with that."