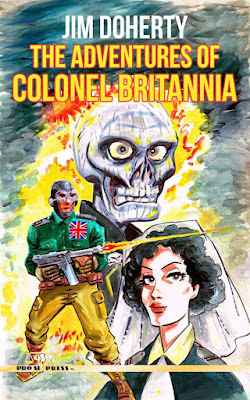 As the world reels from events that will soon lead to World War II, Commander Frederick Wentworth, RN, separated from Anne Elliot, the girl he loves, by class prejudice, decides to throw himself full-bore into his profession. Qualifying as both a commando and a fighter pilot, he volunteers for a potentially fatal medical procedure, one that, if successful, could make him something more than a soldier.

It could make him a symbol.

Reuniting with Anne, now an RAF nurse, and emerging from the experiment improved to the peak of human perfection, Wentworth adopts the persona of “Colonel Britannia,” the UK’s answer to the flamboyant Nazi military leader, Das Silberne Skelett, “The Silver Skeleton.”

In the course of the War’s early years, Wentworth will not only embody the spirit of his home country and all that stands for right during the war, but he will save an entire convoy from a sub attack, take on the Skeleton at every turn, become the UK’s top ace during the Battle of Britain, and fight with everything he has to stop the Nazi menace. If he’s good and lucky enough.

THE ADVENTURES OF COLONEL BRITANNIA by Jim Doherty with stunning cover art by the legendary Joe Staton and print formatting by Antonino lo Iacono and Marzia Marina is available in print for $12.99 at https://tinyurl.com/49zwyzxw.

This superheroic collection is also available on Kindle formatted by lo Iacono and Marzia for $0.99 for a limited time at https://tinyurl.com/h9r4c2ma. Kindle Unlimited Members can read this thrilling adventure for free!