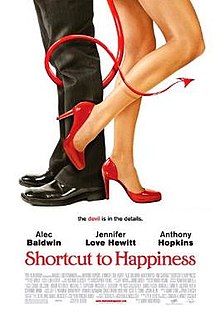 Remember "The Devil and Daniel Webster"? Do you remember the part where Daniel Webster takes over a publishing house and helps a writer who sold his soul to the devil, played by a particularly minx-ish Jennifer Love Hewitt? No? Me neither.

Still, this "inspired by" story has a lot to say about both the desires of writers and learning to be satisfied with one's lot in life. And about the longing to be remembered.

Jabez Stone (Alex Baldwin), jealous of the success of a fellow writer and in the middle of one of the worst days of his (or anyone's) life, offers his eternal soul for happiness and success. Of course, the sultry and ever vigilant Satan (Hewitt) shows up at his door with the answer to all his problems and masterfully twists his wishes in classic Faustian style.

When she first asks Jabez what he wants from life, he answers from the heart:

Jabez: I want to write great books that last.

Devil: I can't help you with that. That's a matter of talent.

Of course when the Devil (through the business of publishing books) gets a hold of his goal, she turns his definition of success into something more measurable in dollars and sales and lifestyle achieved. She twists "books that last" into "achieving celebrity through writing."

Devil: You want to be a success.

Devil: Your want to be a success so you can write great books and people will appreciate your talents,  is that right?

Devil: Then you've come to the right person.

And she lives up to her bargain. Jabez gets a huge book deal, a hefty advance, a new apartment, women wanting him... but he isn't happy with his work. He knows it's crap, but the publisher keeps him so busy with publicity and constantly changes his work to make it more commercial and his ideal dream of success falls away to feed the machine. His work isn't recognized by critics, nor are the films received well at all -- outside of the box office. Money isn't the problem.

The problem is that (pardon my use of the business cliches) his cheese moved, or his goalpost shifted.

He's so busy keeping up a writer's persona that he can't write the kind of stuff that he dreamed of having stick around to be his legacy.

When he confronts the Devil about that, she quickly corrects him, reminding him that, "You're successful, aren't you?" He nods, and gives a less than enthusiastic response, to which she replies, "This is not some fantasy where you sit in a rocking chair and write essays about the human condition."

But that's what he wanted all along. To matter to readers, not to matter to the machine.

I won't spoil the whys but suffice it to say that later in the film, Daniel Webster (played by the brilliant Anthony Hopkins) defends Jabez's original dream in front of a jury of writers that includes Jacqueline Suzanne, Ernest Hemingway, Truman Capote, Mario Puzo, Oscar Wilde, and other famous writers.

What he says in that defense perhaps matters most of all to us as writers:

But when Mr. Stone came to her, or rather when she came to Mr. Stone, what my client really wanted was readers. He wanted people to read what he wrote. He's a writer oh, that's what writers want. An audience, an audience for his words, for his vision, for his truth, if you will.

Read that again. If it doesn't hit home for you, then maybe you're just feeding the machine too (whichever level of machine you write for).

Then, to drive the point home, Webster adds: "It's good to have someone around to remind us."

One other point I want to mention from this cool flick. We all need a Mike in our lives.

Before his deal with the Devil, Jabez was friends with a group of writers who were all struggling for that first sale to a publishing house. Among that group of friends is a guy named Mike. Unfortunately, that relationship between Mike and Jabez doesn't fare too well in the midst of all the business and success Jabez experiences.

When accepting an award for his latest novel, Jabez interrupts his acceptance speech to indulge his regrets instead.

When I was younger he was the first guy I'd show my stuff to. Mike was a tough critic. He had a great bullshit detector. But when he liked something, well, that was a good day.