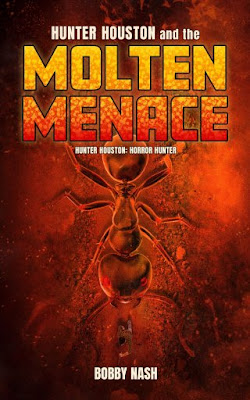 Are you ready to meet Hunter Houston: Horror Hunter?

Now available: Hunter Houston and the Molten Menace! The first of four novellas featuring Hunter Houston: Horror Hunter is now available in paperback and ebook for your monster-battlin’ pleasure. Paperback is only $5.99! What a deal!

About Hunter Houston and the Molten Menace:

When the South’s preeminent monster hunting badass vanishes without a trace, it’s party time for the weirdest, creepiest, most menacing things that go bump in the night. Is there anyone strong enough, brave enough, or stupid enough to fill Bubba’s shoes?

Hunter Houston is the Horror Hunter, the South’s Number Two Monster Hunter. He’s the guy who handles the small stuff. He’s not the hero we need, but he’s the hero we’ve got. When Bubba and his team vanish, Houston has to step up and handle the extra load. If only it wasn't so much like work.

When the war between two unknown cryptid armies breaks out beneath Atlanta, Georgia, the entire state is in deadly jeopardy. Diving deep beneath, can Houston put a cork in this situation before it spills out into the city streets?

Hunter Houston and the Molten Menace is available from Amazon (paperback).