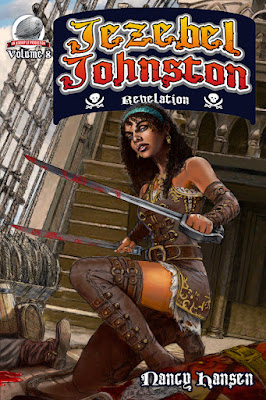 Airship 27 is proud to announce the release of the 8th chapter of writer Nancy Hansen’s pirate queen saga; “Jezebel Johnston – Revelation.” In India, employed by the Maratha Warlord Shivagi, Jezebel Johnston directs the captured ship Mastiff in its battle against a superior British warship and wins the contest. To show his gratitude, Shivagi frees the mulatto pirate and her two friends, dancer Zuri and African warrior Amaka, while granting them whatever they desire. Though her companions only wish for their freedom, Jez request the ship and its captured crew.

Using her learned manipulative skills, she quickly gains the trust of the sailors representing mixed nationality and soon is sailing westward back to the Caribbean and her home in Tortuga. Little does she realize what she will find there and the challenges it pose to her new career as a Pirate Captain. Once again writer Nancy Hansen delivers a taut wonderfully realized story of high adventure with a cast of truly remarkable characters you won’t soon forget.