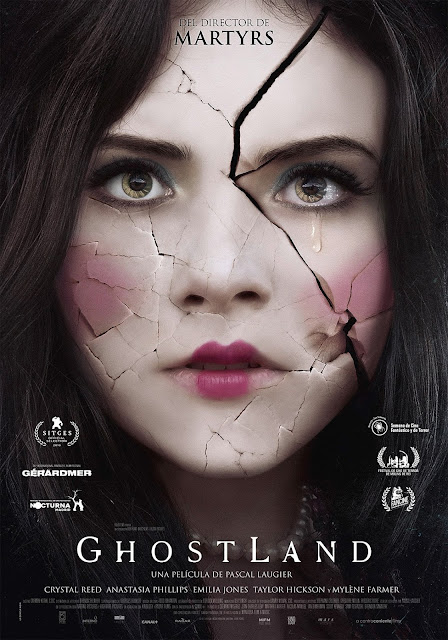 I won't lie to you. Ghost Land (or Incident in a Ghost Land on Netflix), like a typical movie by Pascal Laugier, is an intense and violent film. And it could be triggering because of it's equating sex and violent behavior. It also uses two of the oldest and potentially most damaging tropes in the horror genre -- the two killers include a crossdresser (there's no context of being a trans-woman in this case) and mentally disturbed man with the functionality of the young child.

That said, it's still just as impactful and important a film as Laugier's now classic Martyrs.

It's also a truly difficult movie to review without spoilers, so be warned. I'll try not to spoil to much, but to be fair, you have had several years to see it by now.

Beth and Vera are moving to the country to their late aunt's house. Of course it's creepy and filled with dolls because, well, just because. Vera is slightly older, into boys, and the "cool" sister while Beth is younger, on the verge of becoming a woman physically (i.e., getting her period), and writes horror stories inspired by her idol H.P. Lovecraft. The news reports about serial killers who are invading homes, killing the parents, and trapping young teenage girls. So, when the inevitable happens and the aunt's creepy home is attacked, Beth and Vera's mom fights back.

Cut to years later, and Beth is a successful horror novelist while Vera is a broken soul who lives with her mom and has a room padded with mattresses to keep her from hurting herself.

This is where it gets weird and harder to avoid spoilers. And where it brings us to the movie's first message about writers:

Beth's newest book, considered her best by reviewers, is called Incident in a Ghostland (also giving the movie its title), and is all about the night she, her sister, and her mother were attacked.

She has taken all that emotion from the events and transformed it into a novel that can help her move past it, set it behind her, help her live a less traumatic life.

Like interviewers tend to do, one asked Beth is the story is based on reality. Beth responds, "Do you want to know if it's autobiographical?"

Of course it is. A little bit of everything in our work is. Maybe ours isn't as dramatically parallel to our truth as Beth's, but there are bits from the text and characters that are. Because as writers we are also stealing from reality and stitching the elements of our lives into our work.

Now for the second, and more important, message this movie tells us about writers:

When writers retreat, we retreat into stories.

This is where the review dives headlong into Spoilerville, so be warned.

It's all just a story. The truth is that in response to the trauma of the attack, she had created a story in her head and has escaped into it. A wonderful husband, a cute kid, a mom who remains home and takes care of Vera -- it's all just a story. In the real world she's still in her aunt's house, still captured by the two killers, and still being tormented and dressed as a doll for their sicko amusement. Her mom is dead, and she and her sister aren't too far behind judging by the bruises and damage they've taken.

No matter the story she continues to escape into, Vera is always there, and always calling her to come back, to help her, to return her to the real world.

When I said earlier that writers retreat into stories, thankfully it's not as damaging or traumatic as Beth's retreat. But we do, either into reading or writing. And both are typically positive outlets for dealing with stress and worries but can be abused.

Inside her story, at her new novel release party, she even has the opportunity to sit down beside her idol and hear him praise her work. When H.P. Lovecraft himself tells her how amazing her work is and possibly better than his own, it's the greatest temptation to remain in the dream.

Of course it's a common fantasy among writers. We would love to have our favorites tell us we're worth it, our work is good enough, or great even, and it's a sort of closure we rarely get. No wonder the temptation is so strong for her.

But, after all is said and done, when Beth is being taken away in an ambulance, she remains committed to her stories, in spite of her ordeal. As she is loaded into the vehicle, she spies the typewriter on the ground, left where she had through it through the window to escape. While they pull away, the EMT asks her if she plays sports, especially to be so strong to make it through what she had survived.

She shakes her head. "I write stories," she says.

In the end, it's something we all have as writers, regardless of what we live through.