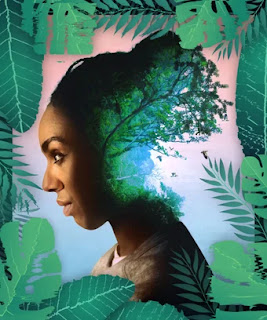 From zombie apocalypse dramas to totalitarian regimes of the future, dystopian stories have long captivated readers with their ability to entertain and terrify in equal measure; to fantastically speculate and ominously warn – and in recent years their popularity has reached unprecedented levels, spanning books, films, TV series and podcasts. One of our latest obsessions in this realm is the new BBC Sounds podcast, Forest 404, part sci-fi thriller, part ecological drama, which imagines a world in which nature no longer exists. Futuristic? Of course. But also worryingly plausible as our planet plunges ever deeper into a global warming crisis.

The addictive 9-part series, written by Timothy X Atack, takes place in the 24th century in the wake of a data crash known as The Cataclysm, and centres on a 28-year-old sound archivist named Pan (voiced by Doctor Who’s Pearl Mackie). From her dark office block, situated four hundred levels below available sky, Pan listens to the terabytes upon terabytes of sound files recovered from before the crash – an era dubbed The Slow Times. "Data costs, that’s what our ancestors didn’t get," our heroine tells us, and so it’s up to her to sift through "the total pits of history" and patiently assess the value of these ancient noises in the modern age (The Fast Times).

It’s a task at which she excels, tuning into everything from Obama’s speeches on global warming to Neil Armstrong’s moon landing and rendering most of them deletable in the blink of an eye. That is until she stumbles across a sound that pierces her very core. At first she thinks it’s a type of music but soon realises it’s something much more profound. It is, the listener is instantly aware, the hum of the rainforest, replete with the sounds of chirping birds, trickling water, the buzz of cicadas. But for Pan, who has never experienced nature in any form, it’s a strange reawakening to a past that feels somehow familiar, although she can’t begin to imagine why.

Soon we are following our determinedly curious heroine deep into the underworld, and down into the murky depths of what remains of the ancient past (our own present day), in search of answers. She, in turn, is being pursued by her interfering and conflicted boss Daria (Tanya Moodie) and the so-called Hands, sinister agents of the new world’s ruling powers who are determined to derail her quest to unearth the truth. The resulting story – told across three interweaving narratives and set to powerful theme music by Bonobo – is a spellbinding and eerie meditation on what the world would be like if all semblance of the natural environment were wiped out, and how our future might unravel if the artificial intelligence we create should achieve an autonomy of its own.

Dystopian fiction emerged in the late 19th century as a reaction to early utopian novels and the visions they conjured of paradisal societies. In modern terms, according to writer Jill Lepore in her 2017 essay "A Golden Age for Dystopian Fiction", the genre can be defined as something "apocalyptic, or post-apocalyptic, or neither, but it has to be anti-utopian... a world in which people tried to build a republic of perfection only to find that they had created a republic of misery." So why has this gloomy genre tightened its grasp on modern audiences in recent years, with a wealth of new stories such as Forest 404 holding listeners in their grasp?