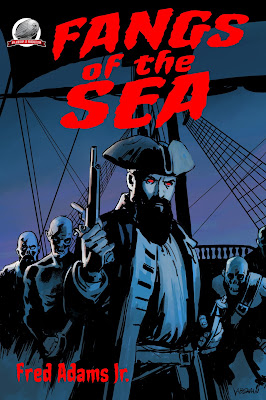 At the height of the Spanish Inquisition, a large number of the faithful fled Spain and the corrupted church to find a haven and new lives on a chain of small islands south of Cuba. There, under the guidance of their priest, Father Beppo, they established peaceful fishing villages that would sustain them in both body and soul. It was their small piece of earthly heaven.

Then black sails appeared on the horizon, furled from the masts of an unholy ship called Votrelec and captained by Varleck, a vampire pirate. Ever on the hunt for fresh bodies to man his crew of the undead, the blood-hungry monster is delighted when discovering the unprotected islands. He is overconfident in his dark powers. Soon realizes the villagers, under the guidance of the old cleric, have no intention of succumbing to his monstrous will.  And so the endless battle of good versus evil is joined. But who will emerge victorious and who will fall when the seas run red with blood?

“Vampire pirate!” exclaims Airship 27 Production’s Managing Editor Ron Fortier. “What more did we need to know? The second Fred Adams began to relate the plot, I could already envision what he was about to unleash on his army of loyal fans. And of course he delivered far and above what we had imagined. This one is truly unique.”

Art Director Rob Davis provided the black and white interior illustration and the amazing Adam Shaw the creepy beautiful cover. Fans of both vampire and pirate tales can now come together and enjoy what is destined to be a bonafide pulp classic from a master storyteller.