Movie Reviews for Writers: The Adventures of Anais Nin 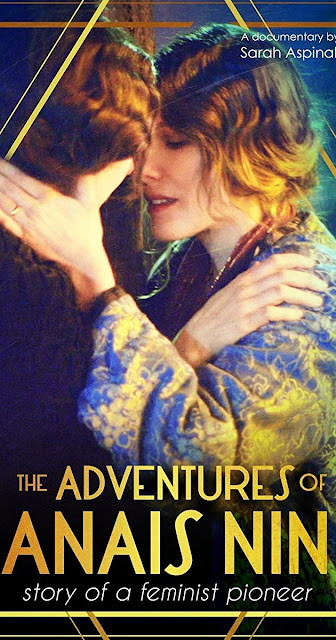 After watching this docu-drama, I regret not having a deeper bench of Nin's work rattling around in my brain. She seems like a very experiential writer who saw with world with the sense of wonder that C.S. Lewis called Sehnsucht, with almost a sort of magical realism-tinted glasses, although her experience was far more sensual than Lewis's spiritual.

While this film covers Nin's sexual life in detail, it also has a remarkable depth in exploring her writing life. Of course, for Nin, those two were intertwined, almost symbiotic, though I'm willing to bet that's not the case for most of us.

But we're here for what the movie says about the writing life and the act of writing.

My favorite line from the film is this one taken from Nin's diaries: "Few know how many women there are in me. When ordinary life shackles me, I escape one way or another."

To me, this sums up the writer's psyche perfectly. Others have phrased it as there are worlds within me. Other, less spiritually tinged writers simply say that they are filled with stories. But I really love the way Nin calls these other women out as, well, other women. Of course she would; it ties in perfectly with her more experiential approach as a writer.

One of the experts interviewed in the film sums it up like this: She needed the writing to make sense of the experience, but also she was having the experience to do the writing. Nin herself explains in her diaries that she often feels she is become another women inside her, that one is mild and calm and pure and a dutiful wife, and that the other is wild and free, a demoness.

I wouldn't go that far in my own writing, but I do feel there are parts of me than can only escape through my work. I will never be a hard-hitting hero like Rick Ruby. I could never explore the wonderings of what my life might have been as a women like Fishnet Angel. Nor could I ever commit the vengeful atrocities some characters have in my horror stories -- but I don't need to. I have my stories to let me experience those things.

Nin writes that "writers make love to what they need," and for me that act of love is a metaphorical one, but still valid nonetheless. I need the adventure, I need the magic and even the science that might as well be magic, and I need unfettered heroism, but I also need to function in the real world as a father, husband, granddaddy, hire-able adult, etc.

But, and this is the most amazing part I think, when the realities start to ground us as writers too much, we always have the escape into our work. Or, as the thoroughly liberated Anais Nin said, once she is rooted down to the ground again, she feels her hair pulled up to the stars again.