[Link]The Pleasures of Being Read To 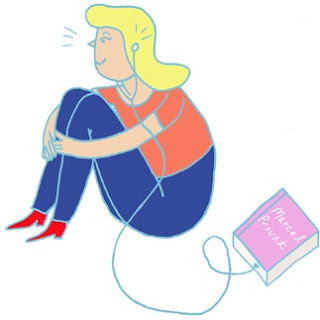 Harold Bloom, the literary critic, once expressed doubt about the audiobook. “Deep reading really demands the inner ear as well as the outer ear,” he told the Times. “You need the whole cognitive process, that part of you which is open to wisdom. You need the text in front of you.” While this is perhaps true for serious literary criticism, it’s manifestly not true when it comes to experiencing a book purely for the pleasure of its characters, setting, dialogue, drama, and the Scheherazadean impulse to know what happens next—which, all apologies to Bloom, is why most people pick up a book in the first place. Homer, after all, was an oral storyteller, as were all “literary artists” who came before him, back to when storytelling, around the primal campfire, would have been invented—grounds for the argument that our brains were first (and thus best?) adapted to absorb long, complex fictions by ear, rather than by eye.

That’s an idea I ran past the neuroscientist V. S. Ramachandran (whom I profiled in 2009). Rama answered via e-mail, saying: “Language comprehension and production evolved in connection with HEARING probably 150,000 yrs ago and to some extent is ‘hard wired’; whereas writing is 5000 to 7000 years old—partially going piggyback on the same circuits, but partially involving new brain structures like the left angular gyrus (damage to which disrupts reading writing and arithmetic). So it’s possible LISTENING to speech (including such things as cadence, rhythm and intonation) is more spontaneously comprehensible and linked to emotional brain centers —hence more evocative and natural.” He did add a caveat: “On the other hand reading allows you to pause and reflect and go back to do a second take.” (Though I’d argue that that’s what the rewind button is for.)

I listened to my first audiobook three years ago, when I had to master an interview subject’s massive literary œuvre in a very short time and realized that, to do it, I would have to use every available moment of the day—including those when traditional reading was impossible: walking home after dropping my son at school; jogging; grocery shopping; doing dishes. Since then, I’ve become a habitué of the audiobook section of my local library, renting and illegally ripping “books” to my iPod. I’ve discovered that audiobooks are (among other things) an ideal way to get to know a work that you can’t, for whatever occult reason, bring yourself to read in book form. I’d taken several runs at two late Updike novels, “Seek my Face” and “Terrorist,” and gotten bogged down in both. I have now listened to them as audiobooks and can report that they contain much of Updike’s typical brilliance that I would have missed had I stuck to Bloom’s method of mastering a book.