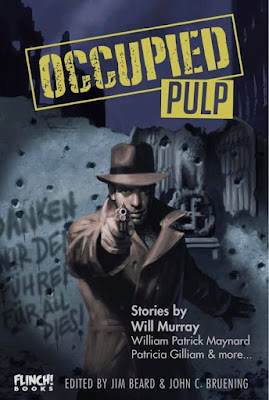 On sale in print and Kindle formats in April 2021, this collection of harrowing tales delivers all the two-fisted, slam-bang action and adventure that are hallmarks of the pulp tradition. Along the way, you’ll encounter fascinating heroes and villains who wage a mighty struggle to either protect the fragile peace or set the wheels of conflict and destruction back in motion.

“We’ve assembled an amazing lineup of writers for this project,” says Flinch Books Co-Founder and Editor John C. Bruening. “I knew from the outset that I would have to be on my A game if I was going to be among the contributors. Individually and collectively, these stories capture the dangerous state of affairs in the months immediately following World War II, when new lines were being drawn, new alliances were being forged and the global balance of power was still up for grabs.”

Flinch Books Co-Founder and Editor Jim Beard concurs. “We’re always looking for a project that not only launches from a solid, traditional pulp base, but also stretches to be something unique among other fiction anthologies. With OCCUPIED PULP, I think we’ve done our jobs.”

So suit up, soldiers! Grab your weapons and step into the hot zone, because there are plenty of skirmishes yet to be fought and won.

The war is over, but the action continues!