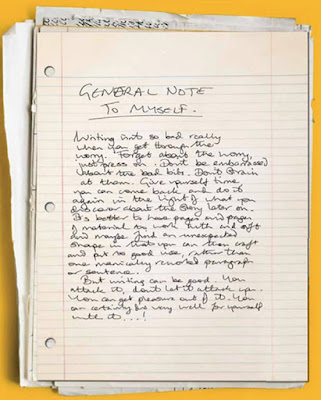 One of Douglas Adams’ notebooks that will feature in 42, a book based on unseen letters, scripts, jokes, poems, ideas, ID cards and to-do notes in the archive left by author.

He was one of the most wildly imaginative writers of any generation but even for Douglas Adams writing could be a torturous process, requiring a “general note to myself” that he would finally get pleasure from it.

“Writing isn’t so bad really when you get through the worry. Forget about the worry, just press on. Don’t be embarrassed about the bad bits. Don’t strain at them,” The Hitchhiker’s Guide to the Galaxy author wrote to himself. “Writing can be good. You attack it, don’t let it attack you. You can get pleasure out of it. You can certainly do very well for yourself with it!”

The fascinating note will be in a book based on the abundant trove of unseen letters, scripts, jokes, poems, ideas, ID cards and to-do notes in the archive left by Adams after his death in 2001, aged 49.

The crowdfunded book shines light on his best-known work, including Hitchhiker’s and Dirk Gently, as well as unrealised projects such as a dark theme park ride at Chessington World of Adventures.

A number of documents reveal how horrible the writing process could be for Adams, not least the “general note to myself” with which he reminded himself that he would get there in time.

“I love it, but I just wish he’d read it to himself more often,” his sister Jane Thrift said. “I think it [writing] was a tortuous process for him, not all the time, but when it was difficult for him it was really difficult.”

On another page of typed notes, Adams wrote: “Today I am monumentally fed up with the idea of writing. I haven’t actually written anything for two days, and that makes me fed up as well.’

Typically for Adams, his complaining quickly morphs into an imagined conversation with a dragon called Lionel.