PUBLIC DOMAIN CHARACTERS: A USER'S GUIDE -- IF YOU LIKE... 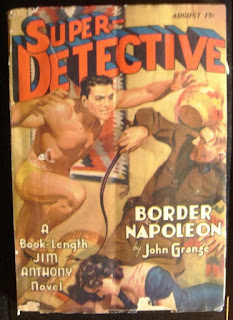 One of the issues that writers face is an inability to fulfill the lifelong desire of writing a character they love. Take me, for example; I am one of the last major fans of the occult work of Dennis Wheatley. My chances of writing his seminal hero, the elderly soldier/magus the Duke de Richleau are, as some of my Southern friends like to say, “slim to none and slim already left town”. Sad fact, but absolutely true. I have also reconciled to the fact that I will also never have the luck of writing the Shadow, John Thunstone, Shang Chi, Daredevil, or Kull the Conqueror.

However, when examining the world of public domain heroes, you can enjoy a piece of your dream by grabbing some of the pastiche and homage characters that appeared over the years. Here are a few you may wish to consider.

1. Doc Savage – One of the most imitated heroes in fiction, Doc Savage has influenced comics, films, and many other areas of media. However, he is basically untouchable and shall remain so for the next few lifetimes. Here are three characters, however, written in the pulp period based on the great adventurer that are available to writers:

a. Jim Anthony – half-Native American, half Irish, manly, strong, brilliant, and wealthy. Jim Anthony is a version of Doc that fought evil world-shaking foes (for his first 10 tales) and enjoyed the company of beautiful women. An excellent alternative.

b. Thunder Jim Wade – Created by horror writing legend Henry Kuttner, Thunder Jim Wade grew up in an advanced civilization in Africa and even owns his own island. His favorite device is the Thunderbug, a combination plane/tank/sub and he battles evil-doers around the world. Also, he owns his own secret island as a base. 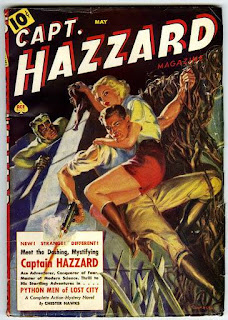 c. Captain Hazzard – Blinded as a child in an explosion, Hazzard developed a form of ESP before surgery restored his eyesight. A genius adventurer with a team of aides, Captain Hazzard only appeared one time in pulps and has received a few revivals since that single appearance. A great deal can be done if you read the first rather poorly written novel and take this Doc Savage pastiche your own direction.

2. The Shadow – The Shadow’s influence upon fictional heroes is probably the only one equal or greater to Doc Savage. Even legendary pulp hero Richard Wentworth, the Spider, emerged from this character’s influence. He did spawn several effective pastiches over the years, though most remain under the control of individuals or companies. Therefore, I will simply give you one that should fulfill your dreams:

a. The Black Bat – Tony Quinn, a crusading District Attorney, has acid thrown in his eyes by a gangster. Blinded, he secretly receives sight again from an experimental procedure that also grants him perfect night vision. Pretending his blindness continued, he dresses in a black costume and battles crime as the Black Bat. This one practically writes itself; the only thing lacking are interesting villains. The Black Bat’s enemies were dull and forgettable, which probably hurt sales. Always remember, his DC comics counterpart’s villains are known throughout the world by non-comic fans. If you create some fantastic enemies, the Black Bat may grant you your dreams of the Shadow.

3. Tarzan – Hero of pulp, films, radio, television and more, Tarzan is probably one of the top five best known fictional heroes in history. Whether people know him from the classic Edgar Rice Burroughs novels, the many films using him in various capacities, or the television series that emerged, people know this archetype. Obviously, Tarzan is as untouchable as the above heroes (and do not listen to those who believe otherwise unless you plan on enriching lawyers), but he has many public domain peers. Here are a few: 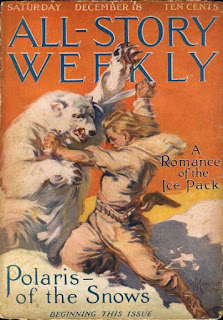 a. Polaris of the Snows – Written in 1915 by Charles B. Stilson, Polaris was raised by his father in Antarctica and grew up a giant, blond Tarzan type. After his father passes away, he decides he will find civilization and discover his identity. Of course, he rescues a beautiful woman along the way and discovers a lost civilization in the process. Polaris is a basically forgotten character who has a slightly different direction for his origin.

b. Ki-Gor – Subject of over fifty novels, Ki-Gor is a blond jungle lord who had most of the ideas Burroughs brought in his tales. He possesses a beautiful wife, native friends who he trusts and  who provide good tales (under the better writers), and an Africa replete with lost civilizations, evil adventurers, and weird creatures. You really cannot go wrong with writing Ki-Gor if your dream is to write Tarzan tales.

c. Mowgli – Created by the legendary Rudyard Kipling, Mowgli and his Jungle Book stories are about as much fun as you can have reading fiction. Most know the characters from the Disney animated film (which I happen to adore), but there is so much greater depth to that world than any film can impart. Mowgli, Shere Khan the lame tiger, Bagheera the black panther, Baloo the sloth bear, Kaa the giant python, Mother and Father Wolf…I could go on for days of the rich world Kipling created. Mowgli and his tales are the stuff of dreams and a great choice for any prospective writer. One final note—the character of King Louis is NOT from Kipling. That is a Disney creation (played by musical great Louis Prima), so do not use him in your stories.

This is just a start, but the best plan is to usually start at the top of any list, so Pulp heroes you can write to get the feel of writing the untouchable should be no different.

Frank Schildiner is a martial arts instructor at Amorosi’s Mixed Martial Arts in New Jersey. He is the writer of the novels, THE QUEST OF FRANKENSTEIN, THE TRIUMPH OF FRANKENSTEIN, NAPOLEON’S VAMPIRE HUNTERS, THE DEVIL PLAGUE OF NAPLES, THE KLAUS PROTOCOL, and IRMA VEP AND THE GREAT BRAIN OF MARS.  Frank is a regular contributor to the fictional series TALES OF THE SHADOWMEN and has been published in FROM BAYOU TO ABYSS: EXAMINING JOHN CONSTANTINE, HELLBLAZER, THE JOY OF JOE, THE NEW ADVENTURES OF THUNDER JIM WADE, SECRET AGENT X Volumes 3, 4, 5, 6, THE LONE RANGER AND TONTO: FRONTIER JUSTICE, and THE AVENGER: THE JUSTICE FILES. He resides in New Jersey with his wife Gail who is his top supporter and two cats who are indifferent on the subject.

NOTE: This article was originally posted at Bibliorati. It is reprinted here by permission.
Posted by seanhtaylor at 4/20/2021 11:00:00 AM